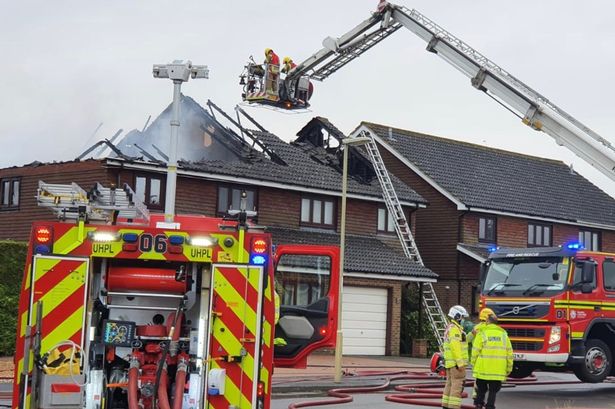 A house has partly collapsed after being struck by lightning at the start of a weekend of thunderstorms across the country.

Firefighters rushed to the address in Andover, Hampshire, with a dramatic picture showing the scale of the damage..

The roof completely caved in while smoke is shown coming from the top of the building.

It is not known at this stage if anyone was injured in the terrifying incident.

It comes as hundreds of Brits said they had been woken up by storms as the heatwave came to a dramatic end.

At 6.30am today Hampshire and Isle of Wight Fire and Rescue Service said firefighters were at the house on Mercia Avenue, around 30 miles north of Southampton.

Have you suffered any damage caused by the thunderstorms overnight? Email webnews@mirror.co.uk

The fire service posted on Twitter : “HIWFRS firefighters are on the scene in Mercia Avenue, Andover. After a house was struck by lightning.

“Please be advised there is a road closure in place at this incident.”

The Met Office has said that the heatwave will be replaced with unsettled and thundery conditions for southern and central areas, with yellow weather warnings in force.

A thunderstorm warning is in place until 10pm on Saturday, with the possibility of heavy rain that could cause disruption and flooding.

The warning covers southern England and Wales, potentially disappointing anyone who hoped for a dry, sunny trip to the coast.

A yellow wind warning for the southern coastal counties of England, lasting from Friday afternoon until midnight, was issued due to strong north-easterly winds of up to 55mph.

The Met Office has issued yellow weather warnings as the heatwave comes to an end
(Image: Met Office)

Forecasters warned that this could cause tricky driving conditions, especially for larger vehicles or those towing caravans.

Saturday is likely to see frequent lightning, thundery rain and continued strong, gusty winds in the areas covered by the thunderstorm warning.

There is also a risk of large hail falling in a few places, and where there are heavy downpours there could be up to 35mm of rain falling within an hour, bringing the risk of flooding.

A second yellow warning for thunderstorms shifts the focus away from the far South West but still covers much of southern England, parts of central England and the far south east of Wales, running from 9am on Sunday morning through to midnight.

Forecasters said some of the heaviest showers are expected in the South East in the morning, before falling more widely across the warning area as the day goes on.

There is the potential for up to 80-100mm of rainfall to build up in some places over the course of the day, which will bring a risk of flooding and some poor driving conditions with surface water likely on roads.

Met Office principal operational meteorologist Frank Saunders said: “The warnings in place over the weekend show a marked shift in the weather pattern for many southern areas as low pressure moves in, with potential impacts for business and the public.

“This more unsettled weather brings a risk of torrential downpours and flooding in some places.

“However, areas further north will cling on to see some fine weather through the weekend, although not quite as hot as recently.”

UK weather: Thunderstorms and heavy rain set to cause major flooding after heatwave

COVID-19 peaks examined across the UK

The flooded Cambodian villagers who refuse to move on – BBC News