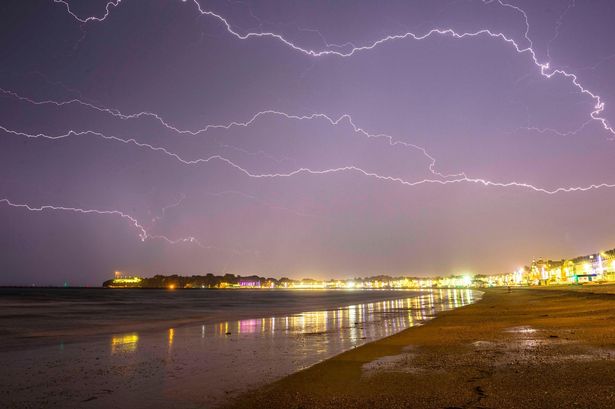 The Met Office has issued a yellow weather warning as more thunderstorms hit the UK this weekend.

Thunder and lightning are on the cards for southern England and Wales, forecasters have said.

A warning which began yesterday at 8pm is in force until 10pm today, potentially disappointing anyone who hoped for a dry, sunny trip to the coast.

Saturday is likely to see frequent lightning, thundery rain and strong, gusty winds in the areas covered by the weather warning.

The Met Office said: “Although many areas will miss the worst, thunderstorms may lead to some disruption and flooding.”

Another yellow warning for heavy showers and thunderstorms is in place across southern parts of England and Wales from 5am to midnight tomorrow.

The Met Office issued a yellow warning for thunderstorms from 5am to midnight tomorrow
(Image: Met Office)

Heavy rainfall with 30-60mm is possible in some locations, according to the Met Office.

Forecasters said some of the heaviest showers are expected in the South East in the morning, before falling more widely across the warning area as the day goes on.

There is also a risk of hail and gusty winds, with possible flooding and travel disruption.

Forecasters said: “Heavy showers and thunderstorms may lead to flooding and transport disruption in places on Sunday.”

A yellow warning for thunderstorms is in force until 10pm today
(Image: Alamy Live News.)

Forecasters said the unsettled weather looks set to continue early next week, with more persistent rain expected for much of the UK.

This morning, a witness described how his neighbours escaped unharmed after a lightning strike caused the roof to collapse and flames to spread through two semi-detached houses.

A 70-year-old woman was assessed by paramedics after the strike severely damaged the two houses in Mercia Avenue, Andover, Hampshire.

The incident came as storms hit the south of England, bringing the recent heatwave to an end.

A house on Mercia Avenue in Andover was hit by lightning this morning
(Image: PA)

Firefighters at the scene on Mercia Avenue
(Image: PA)

Neighbour Barrie Austen, 79, said: “There was this enormous bang, it was obviously the lightning, I think it woke the rest of the street up.

“I saw the flickering and when I looked out I saw the roof of the semi-detached house completely ablaze and it had completely gone.

“The side that supports the roof, that collapsed as well and then the flames spread into next door.”

A Met Office amber warning for extreme heat had been in place for England until midnight on Thursday.

The country reached its hottest temperature of the year on Tuesday when 32.2C was recorded at Heathrow Airport in west London.

Fine, very warm and dry for many, though cloudier in some North Sea coastal areas. Cloudier and more unsettled over southern UK where some heavy showers and thunderstorms at times, particularly first thing and again this afternoon.

Fine, very warm and dry for many, though some North Sea coastal areas cloudier. Heavy showers and thunderstorms will affect parts of southern UK, especially East Anglia and southeast England.

Outlook for Monday to Wednesday

Scattered showers and thunderstorms on Monday, these more widespread on Tuesday and Wednesday. Temperatures generally close to normal with light or moderate winds for most places.

Student mental health: Depressed and living in a bubble of one – BBC News