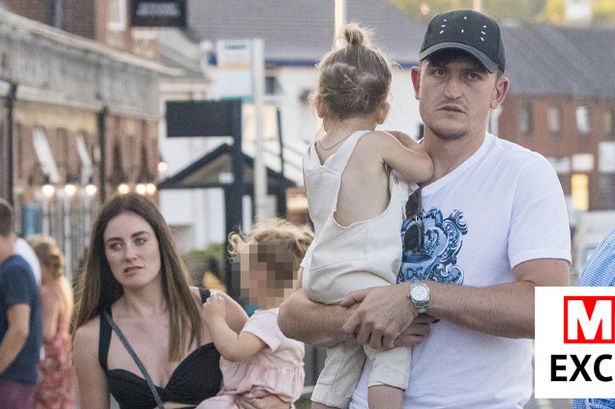 The Three Lions duo, along with their partners, pals and string of women, hired out an island in the exclusive beach-side pool bar of SantAnna – where Maguire was drinking last year before being arrested on the Greek party island.

Grealish is thought to have picked up the bill after the group’s Wednesday session, which saw the pals drinking 250 Euro bottles of Disaronno and 310 Euro magnums of Perrier Jouet champagne – as well as plenty of expensive food to keep them going.

Maguire, 28, opted for a more low-key break as he took his family to North Devon and had drinks on a terrace at SQ Bar in Braunton, followed by a fish supper at Squires – where a large haddock and chips costs £7.90.

Which of these holidays would you have preferred? Join the discussion in the comment section

Maguire was last year found guilty of assault, swearing in public and attempting to bribe a police officer after a brawl in Mykonos.

Raheem Sterling, who had been in Mykonos, has now been pictured with his family lapping up the sun on a yacht in Ibiza, along with partner Paige Milian.

Harry looked quite the family man as he doted on his daughter
(Image: Spartacus / SplashNews.com)

Get all the latest sports news straight to your inbox. Sign up to one of the Mirror’s newsletters

The island they hired out usually has a 20,000 Euro minimum spend but that was waived because of who the stars were, the Mirror was told.

One bar source said: “I think Grealish paid. He was incredibly drunk – but who can blame him after the summer they had?”

The group arrived at SantAnna at around 3pm and were still going strong as the popular spot closed its doors at 10pm, before the group was whisked away to private villas in estate cars.

The island they hired has its own staircase which leads to a secret underground venue, where those who have access can see into the pool but cannot be seen in return by swimmers, the Mirror was told.

Another worker said: “I think they’re a good group. Lots of fun and very polite.”

Man United’s Shaw chatted and laughed for chunks of the afternoon with Denzel and was pictured beaming as he boogied with his arms in the air.

Grealish’s best mate Ollie Priestley took a tumble and limped to a sofa.

The players have been letting their hair down for almost a week on the Greek party island following England’s devastating penalty loss to Italy in the European Championships final.

Maguire found himself in court after a brawl in Mykonos in 2020
(Image: AFP via Getty Images)

Workers on the island – which attracts huge numbers of Italian party-goers – have lauded the players as “absolute gentlemen”.

A video that went viral last week showed the boys – led by a topless Kyle Walker – belting out Euro 2020 anthem Sweet Caroline at the exclusive Principote Beach Club, where they drank four-litre cocktail pitchers, the Mirror was told.

Teammates have been eating and drinking at the swanky venue, where a white wine magnum costs up to €4,900 and a bottle of champagne can fetch €6,500.

The defender became an England hero and bagged a goal in the Quarter final
(Image: Getty Images)

But our down to earth boys stuck to the more standard cocktail drinks, staff at the venue said.

One cocktail costs around €25 and so the England players got their money’s worth with pitchers.

One staff member told the Mirror: “They’ve been here every day, it was great when they sang that song.

“They were honestly such a great group, really fun and really polite.

“They were drinking the same as many people, things like cocktails – but lots of them of course. Four litre jugs.”

Walker, 31, was also pictured over the weekend at SantAnna Bar with his fiancee Annie Kilner, 27.

His chirpy attitude has gone down a storm with staff on the island, who had nothing but praise for the Man City defender.

But had Walker been at that very venue days earlier he could have run into Italian foe Jorginho – who missed a penalty as England lost to Italy at Wembley last week.

“They weren’t here at the same time but that could have been awkward,” one source said.

Declan Rice and his partner Lauren Fryer on holidays

“But Walker was really charming, everyone liked him and people serving him thought he was great.

“He was drinking plenty, having fun and dancing. He was an absolute gentleman and seemed like a genuinely good guy.

“He’s welcome back any time.”