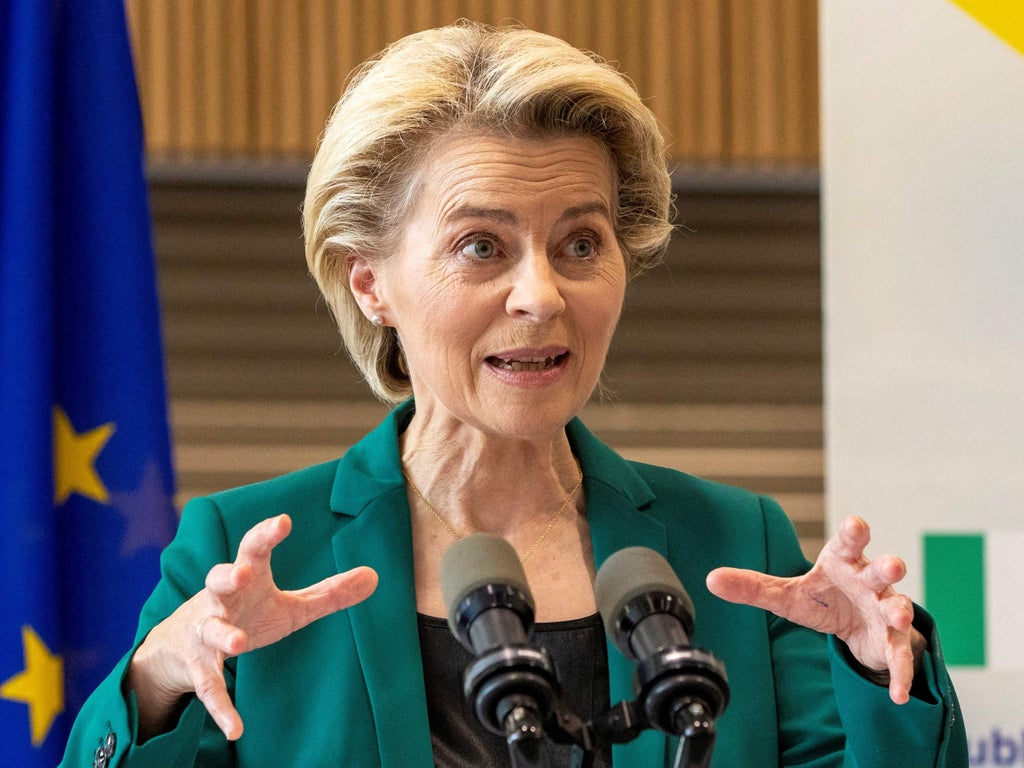 European Commission president Ursula von der Leyen has told Boris Johnson in a phone call that the EU will not renegotiate the Northern Ireland Protocol as he has demanded.

In a call the day after Brexit minister David Frost set out proposals for changes to the protocol Mr Johnson told Ms von der Leyen that the way it was currently being implemented was “unsustainable”.

But soon after the call, the Commission president made clear that Brussels remains implacably opposed to reopening negotiations on the arrangements agreed by the prime minister in 2019 as part of his EU withdrawal deal.

“The EU will continue to be creative and flexible within the protocol framework,” she said. “But we will not renegotiate. We must jointly ensure stability and predictability in Northern Ireland.”

The face-off has set the scene for a costly trade war in the autumn, when “grace periods” run out on the implementation of the regulations agreed by Mr Johnson in areas such as chilled meat exports, parcel delivery and supermarket supplies.

Downing Street today made clear that the UK has not ruled out tearing up the protocol if the EU refuses to make concessions over the summer.

A No 10 spokesperson said: “We are not calling for the scrapping of the protocol at this time.”

Under repeated questioning, the spokesman was unable to point to any breaches by the EU of the terms agreed by Mr Johnson in the protocol for the creation of a new customs border in the Irish Sea and the implementation of checks on goods travelling between the British mainland and Northern Ireland.

A man walks past an artwork by Will Blood on the end of a property in Bedminster, Bristol, as the 75 murals project reaches the halfway point and various graffiti pieces are sprayed onto walls and buildings across the city over the Summer

People during morning prayer during Eid ul-Adha, or Festival of Sacrifice, in Southall Park, Uxbridge, London

Commuters, some not wearing facemasks, at Westminster Underground station, at 08:38 in London after the final legal Coronavirus restrictions were lifted in England

A view of spectators by the 2nd green during day four of The Open at The Royal St George’s Golf Club in Sandwich, Kent

Cyclists ride over the Hammersmith Bridge in London. The bridge was closed last year after cracks in it worsened during a heatwave

The sun rises behind the Sefton Park Palm House, in Sefton Park, Liverpool

Sir Nicholas Serota watches a short film about sea monsters as he opens a £7.6 million, 360 immersive dome at Devonport’s Market Hall in Plymouth, which is the first of its type to be built in Europe

Heidi Street, playing a gothic character, looks at a brain suspended in glass at the world’s first attraction dedicated to the author of Frankenstein inside the ‘Mary Shelley’s House of Frankenstein’ experience, located in a Georgian terraced house in Bath, as it prepares to open to the public on 19 July

A local resident puts love hearts and slogans on the plastic that covers offensive graffiti on the vandalised mural of Manchester United striker and England player Marcus Rashford on the wall of a cafe on Copson Street, Withington in Manchester

England’s Bukayo Saka with manager Gareth Southgate after the match

England 1966 World Cup winner Sir Geoff Hurst stands on top of a pod on the lastminute.com London Eye wearing a replica 1966 World Cup final kit and looking out towards Wembley Stadium in the north of the capital, where the England football team will play Italy in the Euro 2020 final on Sunday

A couple are hit by a wave as they walk along the promenade in Dover, Kent, during strong winds

England’s Jordan Henderson celebrates after scoring his first international goal, his side’s fourth against Ukraine during the Euro 2020 quarter final match at the Olympic stadium in Rome

Prince William, left and Prince Harry unveil a statue they commissioned of their mother Princess Diana, on what would have been her 60th birthday, in the Sunken Garden at Kensington Palace, London

Dancers from the Billingham Festival and Balbir Singh Dance Company, during a preview for the The Two Fridas, UK Summer tour, presented by Billingham International Folklore Festival of World Dance in collaboration with Balbir Singh Dance Company, inspired by the life and times of female artists Frida Kahlo and Amrita Sher-Gil , which opens on July 10 at Ushaw Historic House, Chapel and Gardens in Durham

People walk along Regent Street in central London during a #FreedomToDance march organised by Save Our Scene, in protest against the government’s perceived disregard for the live music industry throughout the coronavirus pandemic

A member of staff poses with the work ‘The Death of Cash’ by XCopy at the ‘CryptOGs: The Pioneers of NFT Art’ auction at Bonhams auction house in London

Bank of England via Reuters

Actor Isaac Hampstead Wright sits on the newly unveiled Game of Throne’s “Iron Throne” statue, in Leicester Square, in London, Tuesday, June 22, 2021. The statue is the tenth to join the trail and commemorates 10 years since the TV show first aired, as well as in anticipation for HBO’s release of House of the Dragon set to be released in 2022

Joyce Paton, from Peterhead, on one of the remaining snow patches on Meall a’Bhuiridh in Glencoe during the Midsummer Ski. The event, organised by the Glencoe Mountain Resort, is held every year on the weekend closest to the Summer Solstice

A woman and child examine life-size sculptures of a herd of Asian elephants set up by the Elephant Family and The Real Elephant Collective to help educate the public on the elephants and the ways in which humans can better protect the planets biodiversity, in Green Park, central London

Hydrotherapists with Dixie, a seven-year-old Dachshund who is being treated for back problems common with the breed, in the hydrotherapy pool during a facility at Battersea Dogs and Cats Home’s in Battersea, London, to view their new hydrotherapy centre

Members of the Vaxinol team, who are commercial, industrial and residential cleaners specialising in disinfection and decontamination, use electrostatic spray systems to deep clean the Only Fools Bar in Liverpool

A woman walks her dogs as the incoming tide begins to wash away the heads of G7 leaders drawn in the sand by activists on the beach at Newquay, Cornwall

Adam Chamberlain, 45, general manager of Big Tree pub in Sheffield, has put up over 500 flags, taking 36 hours, in preparation for Euro 2020, which kicks off this weekend

Isobel Salamon, founder of the Edinburgh Cinema Club, poses alongside the Leith Trainspotting murals in Quality Yard, Leith, Edinburgh, for the programme launch of the Cinescapes Festival which starts on July 4 with a Trainspotting 1 and 2 double bill

Balloonists take flight during the opening of the Midlands Air Festival in Alcester, Warwickshire

Hannah Vitos of the Blenheim Art Foundation, poses for a photograph next to artist Ai Weiwei’s Gilded Cage (2017) sculpture in the grounds of Blenheim Palace in Woodstock, Britain

Instead, Downing Street is blaming the EU for operating the new rules in an excessively “purist” way.

The No 10 spokesperson said that Mr Johnson told the European Commission president that the way his protocol was operating was “unsustainable”, adding that solutions to the problems facing the people of Northern Ireland as a result “could not be found through the existing mechanisms of the protocol”.

He told Ms von der Leyen that this was why the UK has set out “proposals for significant changes to it”.

“He urged the EU to look at those proposals seriously and work with the UK on them,” said the spokesperson. “There is a huge opportunity to find reasonable, practical solutions to the difficulties facing people and businesses in Northern Ireland, and thereby to put the relationship between the UK and the EU on a better footing. They agreed to remain in touch”.