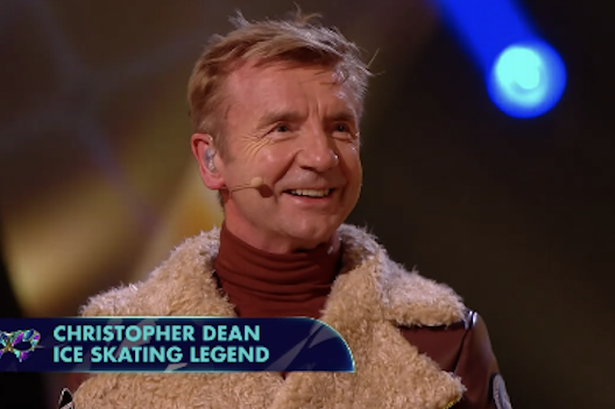 The Masked Dancer UK has unveiled Beagle as being skating legend Christopher Dean in the first of two shock eliminations on Thursday night’s show.

Davina McCall could not believe the 63-year-old Dancing On Ice star was behind the costume – but it all made sense with the clues of him having a famous partner.

Mo Gilligan exclaimed: “You got us good, man!”

Jonathan Ross added: “We didn’t even guess that once, wow!”

“Yes it did! But that’s because you are fit,” replied Davina.

“I am 63 this year!” revealed Christopher, leaving the judges stunned.

The judges thought the celebrity was a much younger star

“It’s been great fun it’s nice to be able to breathe again,” he added.

Zoe revealed she had a crush on fellow masked dancer Carwash as she chatted to the judges and guest star David Walliams.

“I am kicking myself, because I guessed you for someone else!” exclaimed Jonathan.

David, who had correctly guessed Zoe, said: “I just saw her, she can’t stand still for a second!”

“We have spent some time together, David and I,” Zoe replied cheekily.

Judge Davina McCall could not believe her eyes

Zoe revealed her son Woody, who starred on The Circle, did not even know she was taking part on the show.

Asked by host Joel Dommett what it was like to dance in the costume, Zoe replied: “It was crackers, you’ve got a massive huge head and a huge nose and I am wearing breeches which are not very flattering!”

She added: “It’s been an absolute lark, I’ve really loved trotting about, and anyone who is thinking about doing it, do it! It’s so much fun!”

With Wednesday’s episode cancelled for the football, producers are making up for lost time and revealing the identities of two celebrities underneath the elaborate costumes.

So far, Eddie the Eagle has been revealed as Rubber Chicken, Dita Von Teese as Beetroot, Louise Redknapp as Flamingo, and Jordan Banjo as Viper.

There are now just two shows left, with The Masked Dancer UK concluding on Saturday – meaning more double eliminations are to come.

* The Masked Dancer UK continues on Friday at 7:30pm on ITV

The secret diaries of women protesting in Iran – BBC News