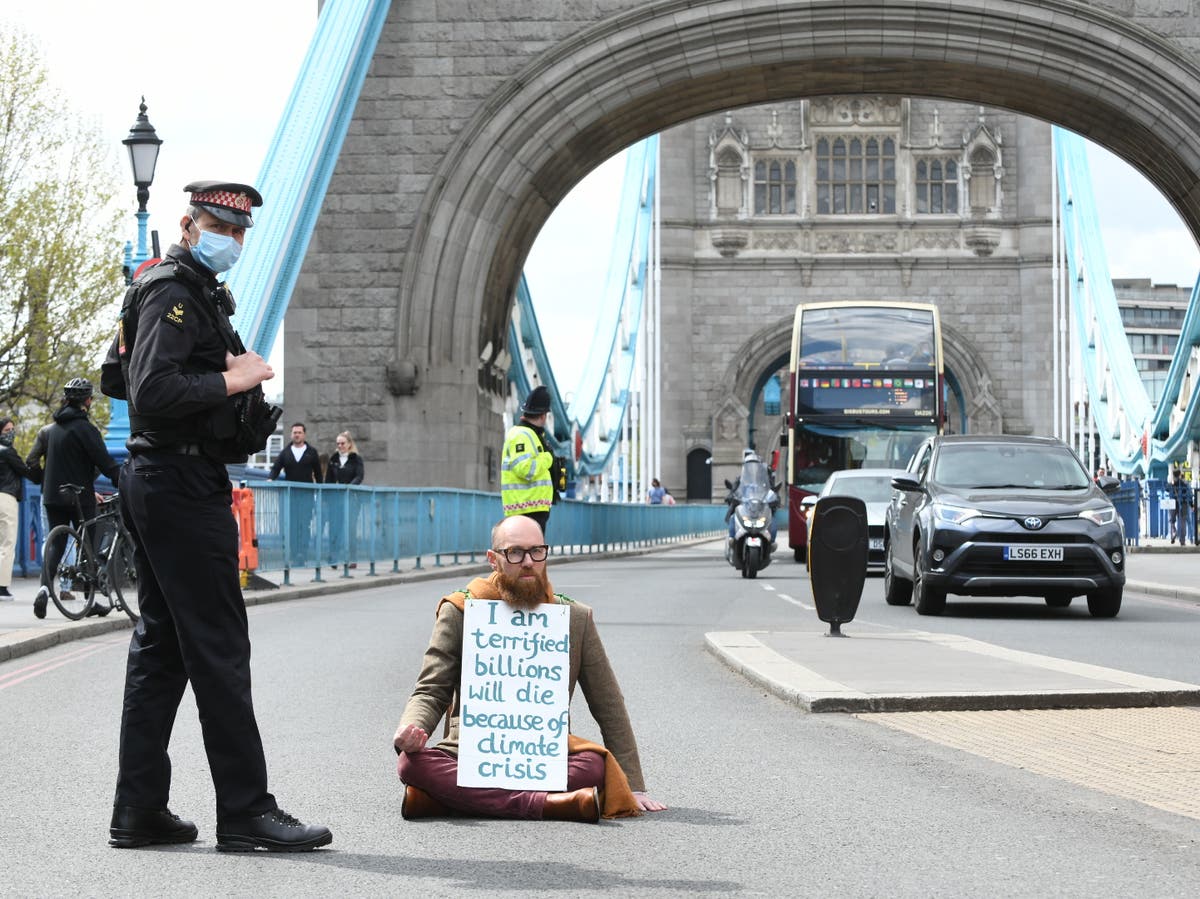 Extinction Rebellion protesters have blocked traffic across the UK to urge the government to take tougher action on climate change.

More than 200 activists, including nurses, teachers and students, sat alone in front of traffic in towns and cities ranging from Bangor in Northern Ireland to Canterbury in Kent.

The group described the “Rebellion of One” demonstrations – held at 11am on Saturday to mark two years since parliament’s declaration of a climate emergency – as “multiple courageous acts of nonviolent civil disobedience”.

Several protesters were arrested, including GP Sarah Benn, who said she obstructed a local road in Birmingham to protest “the woeful inertia of our elected leaders in taking the action needed to protect us and future generations from its effects.”

Ten of the 40 protesters in London were arrested, according to Extinction Rebellion (XR). One man glued himself to Westminster Bridge, while Morgan Trowland, a 68-year-old civil engineer from Hackney, east London, glued himself to Tower Bridge.

Mr Trowland said: “I’m terrified that billions will die because of the climate crisis, humans and non-humans. I’m freaking out that many people are accepting this, or feel powerless to change the course. I want to show onlookers that we each have phenomenal power.”

Each of the protesters wore signs bearing messages such as: “I am terrified for my grandson’s future because of the climate crisis.”

Andrea Muntiu, a 36-year-old nurse who blocked traffic in her home town of Ipswich, said: “People may wonder what a nurse is doing sitting in the road with a placard. They may wonder what impact this will have on my career or whether I’ll get in trouble with the police.

“I am aware of the risks but I feel I have a moral duty to warn people about the catastrophic consequences of the climate crisis. Floods, hunger, drought, pandemics, species extinction and social collapse will all be a reality if we don’t act, and the children of this country and of this world will be the first and most affected.

“We cannot let this happen. We can still change things, we can demand the government acts now and safeguards what we have.”

And Fiona Prior, a 58 year-old retired primary school teacher who blocked traffic in Carlisle, said: “I am terrified for the future of my 6-year old grandson. What should I tell him? That I stood back and did nothing or that nana Fi did everything she possibly could to make the changes happen?”

Police speak to a protester kneeling in a road in Cambridge

XR claimed that the government was more concerned about creating positive headlines by announcing tougher targets instead of taking real action.

“We are seeing today that people are scared and frustrated at the refusal of this government to accept the severity of the crisis,” said XR spokesperson Gully Bujak.

“The government needs to commission a national citizens’ assembly on climate and ecological justice, because even if politicians are scared to face the truth, ordinary people are ready for action.”

May Day also saw several “Kill The Bill” demonstrations against proposed legislation which would give police more powers to restrict protests and make it an offence to “intentionally or recklessly cause public nuisance.” The government says the Police, Crime, Sentencing and Courts Bill is necessary to prevent widespread disruption caused by the XR protests of 2019 and last summer’s Black Lives Matter demonstrations.