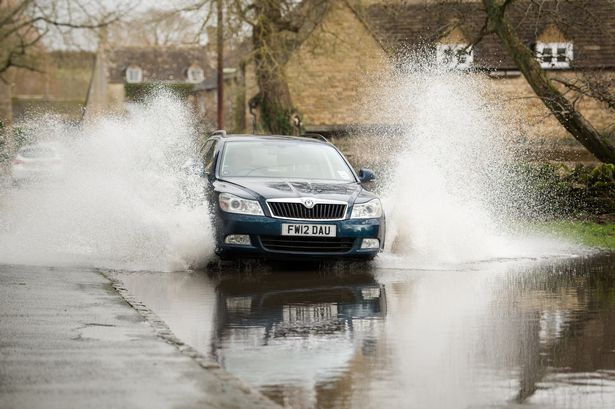 Brits are facing a freeze of -4C as the Met Office warns of a 50mph storm due to hit on Bank Holiday Monday.

Hopes of seeing off the long weekend with an al-fresco pint have been dashed by forecasts of torrential rain, which is expected to only worsen by next week.

Blustery gales with gusts of 45-50mph sweeping in from the Atlantic are set to hit the South West on Sunday evening.

Across the weekend, scattered showers and winds are expected in most parts of the country along with some patchy frost and sunny spells.

And today will see temperatures as low as -4C – colder than Russia, which is set for -1C chills.

Gusts of up to 50mph are set to sweep over the South West
(Image: Getty Images)

Rural areas are set to suffer worse than cities, with lows of -1C to -4C while the South is expected to see rain and even hail but some spells of sunshine.

The cold blast follows one of the driest Aprils on record, with weeks of baking temperatures as Brits enjoyed the easing of lockdown restrictions in parks and pub gardens.

There was an average of 12.8mm of rain across the UK up until April 22, much lower than monthly averages of 72.53mm, according to the Met Office.

But Monday is set to be a washout, with fierce downpours and subzero lows across most of the UK.

Forecasters have said yellow wind warnings could well be issued over the coming days as strong gales sweep in while Brits step out to enjoy eased lockdown rules.

Gales and downpour are predicted throughout the UK
(Image: URL:)

Temperatures are set to plummet well below average with lows of -3C and -4C.

Met Office forecaster Marco Petagna said: “There’s quite a deep area of low pressure coming in from the West on Monday. It’s pretty windy with some gales in exposed areas in the West’s coast and hills.

“We could see a yellow wind warning being issued for Monday. Obviously with lockdown restrictions coming down now there could be more people out and about so the impact could be higher than normal but certainly a very wet and windy day moving in from the West on Monday.

The Met Office has warned of subzero chills and heavy rain
(Image: URL:)

“The west and the south west – coasts and hills out towards western Scotland, western Ireland and southwest England are likely to see the worst of the weather.

“It’s going to stay fairly chilly with below average temperatures for the next few days”.

“Some of the rural areas overnight could get down to -3 or -4C.”

After a bright and frosty start for most of the UK, clouds will bubble up and break into showers for some. Heavy downpour expected for some parts before sweeping off towards the coast.

Showers fading again, except in some coastal areas. Many parts becoming dry with clear periods, leading to yet another cold night, with some frost and a few fog patches.

The downpour is set to continue into Sunday, with another day of scattered showers across most areas. Heavy showers but most places still relatively dry with lighter winds and spells of sunshine.

Outlook for Monday to Wednesday

After a bright start, wet and windy for most on Monday, with the strongest gales hitting the south. Some sunny spells from Tuesday onwards but frost creeping in overnight and temperatures remaining low.

How good are UK adults at DIY?

How much do UK adults drive in a lifetime?

How good are UK adults at DIY?