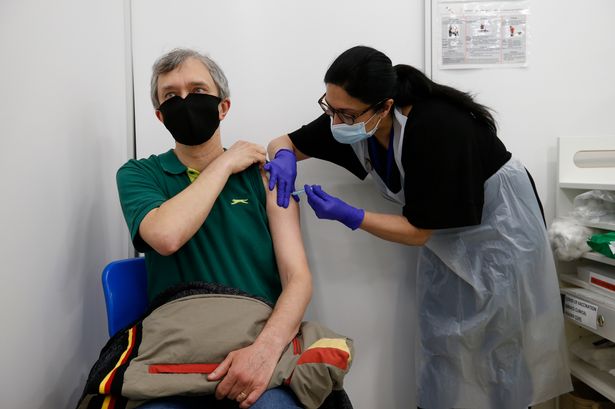 The UK’s coronavirus death toll has plunged dramatically week-on-week even as lockdown eases.

Tragically, another seven people were reported to have lost their lives to the virus across the UK in today’s figures.

But it is a significant drop from last Saturday’s nationwide figure of 32- representing a drop of nearly 80%.

Another 1,907 coronavirus cases were also reported, as the UK’s ongoing vaccine rollout is credited with curbing the spread.

Today’s figures bring the total official UK death total throughout the pandemic to 127,524.

Separate figures published by the UK’s statistics agencies show there have been 152,000 deaths registered in the UK where Covid-19 was mentioned on the death certificate.

Nearly 50million vaccine doses have been given out in the UK in total now, including first and second doses
(Image: Getty Images)

More than 34million people in the UK have now received a dose of a vaccine, with the number to have also received their second dose now nearly at 15m as people in their 40s are now able to get their jabs.

This month brings the next phase of lockdown easing, as England prepares to lift more restrictions in two weeks.

The next round of easing could see the ban on international holidays lifted from May 17, according to reports.

A small number of countries are expected to be on the UK’s ‘green list,’ however, with travel to most countries likely to still require a quarantine period upon return to Britain.

Also from May 17, hospitality will be able to reopen their indoors to punters after a chilly spring of meeting in beer gardens.

Saunas and spas will be also able to open, and up to 10,000 fans will be allowed into stadiums.

The rule change will also allow indoor mingling for the first time in months, with two households of up to six people allowed to mix indoors overnight.

Partygoers were allowed to gather at a warehouse in Liverpool across a two-day event that began last night.

Daily death and case numbers are continuing to fall as the vaccine rollout moves on to people aged in their 40s
(Image: Getty Images)

Revellers at the strictly ticketed event did not have to socially-distance or wear masks, but had to have a negative Covid test result before they were allowed in.

They are being asked to get a follow-up Covid test in the days following Circus’s The First Dance club nights at the Bramley-Moore Dock warehouse, so that researchers can determine the safety levels of such events.

The first unrestricted crowd event of the UK’s pandemic are part of a series of official government trials looking at crowd safety during Covid, as they plan for hopes nightclubs and festivals could return this summer.

The UK’s ‘R’ rate stayed close to static on Friday, with experts describing the pandemic as still shrinking despite transmission rates being recorded as just above 1 in some areas.

But Europe’s third wave and India’s crisis are still keeping public health authorities on high alert for mutant variants of the virus that could seed a resurgence.

Pubs, bars and restaurants have reopened for outdoors drinks and dining
(Image: PA)

Residents of an area of central-east London will be subjected to surge testing, the Department of Health and Social Care (DHSC) announced on Saturday.

People in the E1 postcode of the borough of Tower Hamlets after several cases of the South African and Brazilian variants were detected.

The department said all the confirmed cases were self-isolating and there were no links between the new cases and the cluster recently identified in south London.

Everyone aged 11 and over who lives, works or is educated in the affected postcode is being encouraged to take a test when invitedf from Sunday, whether they are showing symptoms or not, the DHSC said.

UK weather forecast: Heatwave to abruptly come to end with thunderstorms this weekend

The woman showing plus-size can be beautiful – BBC News