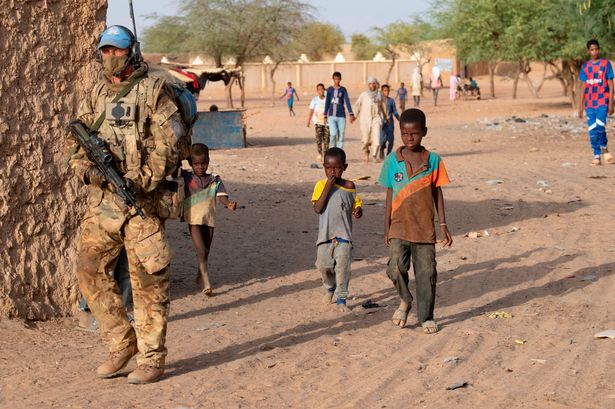 Playing a key part in the world’s most dangerous peace-keeping mission, UK troops are deep inside jihadi bandit country in west Africa.

They are launching the longest desert reconnaissance patrols since the Second World War, hundreds of miles into Mali, in the southern Sahara, to help tackle terrorism across the region.

Almost 250 UN peace-keeping troops have been killed here since 2013, hundreds of thousands of people have been displaced and the al-Qaeda and Islamic State threat is worsening.

This is the UK’s largest operation since Afghanistan.

The missions, which have sent IS and al-Qaeda fleeing into the desert, involve over 200 British soldiers in scores of fighting vehicles.

They are gathering information on terrorists, stopping them from settling and from continuing their evil campaign of robbing and murdering civilians.

In five months, the troops of the Long Range Reconnaissance Group have not fired a shot in anger as both terror factions have fled without a fight.

A Daily Mirror team was among the first journalists to join the British patrols.

UK troops out in force in in Mali as dusk falls
(Image: Daily Mirror/Andy Stenning)

Lieutenant Colonel Tom Robinson, 41, who heads the LRRG, told us: “In Afghanistan we were seeking to defeat an insurgency.

“Here, we are trying to protect the people from an insurgency.

“In Afghanistan we were often patrolling to get into a fight with the enemy. Here, success looks like peace.

“Of course, if someone threatens the local population or us, we are ready to use violence.”

A squadron, the Light Dragoons, on a long range desert patrol in the south east of Mali
(Image: Daily Mirror/Andy Stenning)

Mali has suffered growing instability since 2016 in the north and centre, where fighting between local forces and jihadis has displaced 200,000 people.

The crack soldiers from A Squadron, Light Dragoons – backed by B Company, 2 Royal Anglian – are meeting the UN’s need for a reconnaissance force to perform deep penetration intelligence gathering operations against the terrorists.

There are 13,000 UN peace-keeping troops from 56 countries in Mali.

The Light Dragoons drive heavily-armed Jackal vehicles which can race at 50mph through the desert.

The Royal Anglian infantry use rugged Foxhound vehicles and carry out foot patrols in remote villages.

Sending a message as the illuminating shells show troops are there
(Image: Daily Mirror/Andy Stenning)

We were helicoptered into the temporary operating base outside Tessit, close to the border with Niger and Burkina Faso and where 100 insurgents slaughtered 33 local troops five weeks ago.

Days ago the reconnaissance force patrolled 100 miles to the outskirts of Tessit to scare off the terrorists.

Troops need 17 pints of water each day here where it can be 50C.

Two of the people from Tessit who told us they are living in fear
(Image: Daily Mirror/Andy Stenning)

Many have lost over a stone due to the heat.

At night the mortar team fires harmless illuminating shells into the air to let the terror gangs know they are still there, and to give reassurance to locals.

The next day at dawn the UK troops are on the move to a different location.

The UK’s operations here at the new front line against terror are set to cost £80million over the next three years.

Out of 150 villages visited by the troops, as many as 30 were suspected of being under the control of JNIM – an al-Qaeda faction – and Islamic State in the Greater Sahel.

But the terrorists fled as the British patrols arrived. Lt Col Robinson, the Light Dragoons Commanding Officer, said: “They do not want to get into a fight with us and that affects the armed groups’ credibility.

Resting in the shade after a long shift
(Image: Daily Mirror/Andy Stenning)

“Our presence is keeping them on the move, pushing them out.”

The nomadic insurgency came from Libya. Jihadi groups offer as much as £250 a month, plus an AK-47 and a motorbike, to join their forces.

They have a kidnapping ransom shopping list for urban professionals – the going rate for a doctor is up to £80,000.

A soldier and a local greet each other with respect
(Image: Daily Mirror/Andy Stenning)

Terrorists on motorbikes can sweep up a village of farmers, demanding the equivalent of £1,700 from each home or the occupants face execution.

While we were with the troops in Tessit, locals were wary but friendly.

Local soldier Lieutenant Samou Diakite said: “If I die it is my job. How can I be afraid about it?”

But civilians covered their face for safety.

A man in a head scarf said: “Security has been bad… bandits killing people.

“It’s safe here but not in the countryside.

The days are long and hot for the troops on patrol
(Image: Daily Mirror/Andy Stenning)

“We are happy to see the troops.”

Village elder Mohammad, 40, said: “Everyone in the community is very scared.”

Another local said: “Some of my family have been killed.”

A soldiers cools off after a lengthy desert patrol
(Image: Daily Mirror/Andy Stenning)

For now the terror gangs are keeping their distance but the troops know they are never far away.

We joined the patrol as it went further south towards the border, a place thought to be teeming with terrorists.

We were 130 miles from the relative safety of the UN base in Gao.

Troop leader Captain Alexander Alderman, 27, from Surrey, said: “Our operating area is the size of Belgium.

“We will be doing our job right if not one shot is fired.”