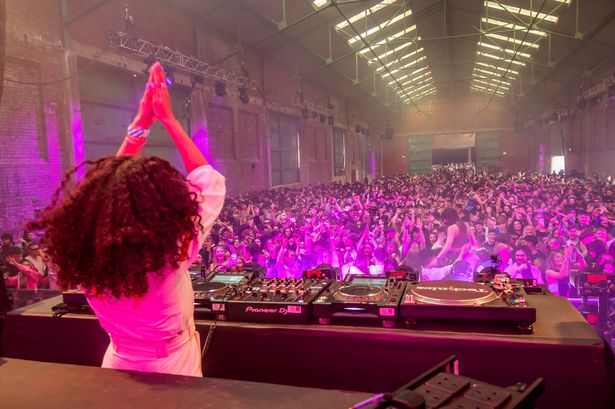 Thousands of clubbers have ditched their masks to return to the dance floor for the first time since the pandemic began.

On Friday and Saturday a total of 6,000 clubbers are being encouraged to “forget about Covid” for five minutes for the pilot nights.

No face masks are required and nor is social distancing for the first nightclubs in 14 months.

‘The First Dance,’ hosted by legendary club night ‘Circus’, has sold out for the event at a warehouse in Liverpool.

It is being held so scientists can look to see if and how crowds mixing and dancing indoors increases the risk of transmission of Covid-19.

It is hoped the event, the first of two taking place on consecutive nights, will pave the way for clubs across the country to reopen their doors.

Thousands of clubbers have been told to drop their masks for the night
(Image: Getty Images)

In the queue outside the venue, Liverpool University student Elliott Cause, 20, said: “I feel like this is a big moment for the UK.

“I feel like uni students have been struggling without this, I feel like this will do a lot.

“You can already see people are so up for it, the energy’s great.”

A total of 6,000 people will have a chance to hit the dance floor this weekend
(Image: Iain Watts/Mercury Press)

Sam Murphy, 20, who is from Belfast, said that after starting at Liverpool Hope University last September, he had the “worst freshers ever” because of coronavirus restrictions.

He said even tearing ligaments in his foot and having to wear a protective boot had not put him off attending the first club night since March 2020.

He said: “No chance – the first thing I said was give me a boot and let me out.”

Mr Murphy, from Belfast, said he had done a coronavirus test on Thursday and again on Friday morning and would take another in five days.

His friend Aodghan Fegan, 21, said: “I hope it all goes well and hope the Covid levels still stay low so there’s more events like this.”

Eighteen-year-old Leah Lawless said she and her friends had been waiting to return to clubs for around a year.

She said: “We are very excited. It’s been hard, it’s been boring, a bit sad, depressing and not the best.”

Air quality and movement was also being monitored as part of a Loughborough University-led study to create guidance to minimise risk.

The night is part of the Events Research Programme, which will also see crowds return to events including the FA Cup final and a music festival held in Liverpool’s Sefton Park.

Clubbers do not have to wear face masks or social distance
(Image: REUTERS)

Press Association reporter, Eleanor Barlow, watching queues form for the event and tweeted: “No masks and no social distancing for this pilot club night event in Liverpool today (no coats either but I don’t think that’s part of the experiment).

Tonight sees six DJs take to the decks and the star turn on Saturday is Fatboy Slim.

The man behind Britain’s first nightclub opening since the pandemic started said he feels “an overwhelming” sense of responsibility.

Of the event, joint Circus founder DJ Yousef Kaher said there would be “one huge stage” with “amazing sound, amazing lights” and an enormous separate cashless bar area.

Revellers described the scenes as having a ‘great energy’
(Image: Iain Watts/Mercury Press)

There will also be multiple tents with toilets outside with places to eat and drink.

“The team at Circus all share an almost overwhelming feeling of pride, emotion, excitement and of course responsibility for what lies ahead,” he said.

“We can’t wait to see the dance floor erupt time and time again as it has over the last 18 years.

“When everything connects, all the dots connect the music, the environment, the people, me playing, everyone having a good time, feeling safe, we can forget about Covid for even five minutes.”

E-tickets could only be purchased by Liverpool city region residents over the age of 18 at a price of £32:50 and were only released after a negative Covid test.

Coronavirus has crippled the nightclub industry, with a recent report finding UK clubs have been forced to make 51% of their staff redundant since last year.

Clubs will have been closed for 15 months by June, when it is hoped all legal restrictions on social contact will be lifted in England.
Barista Jade Edwards, 33, was one of those with a ticket. “It’s going to be one to remember.”