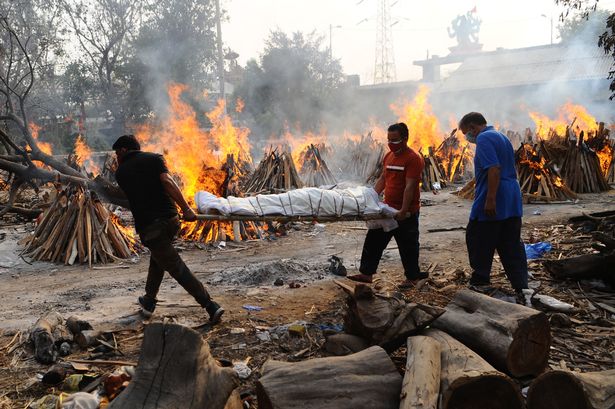 The proportion of UK cases of the India variant of coronavirus has soared eight-fold in just two weeks, new figures show.

A total of 400 cases of the variant have been found in Britain since it was first detected in February, and three mutant strains have been discovered in the UK.

The variant has been linked to a devastating second wave in India, where there were almost 390,000 new confirmed cases and more than 3,500 deaths on Thursday.

It comes as people aged 40 and over in England are now being invited to book their coronavirus jabs and Prime Minister Boris Johnson faced further calls to launch an inquiry into the handling of the pandemic.

Have you been affected by coronavirus? Email your story to webnews@mirror.co.uk.

People carry the body of a coronavirus victim during a mass cremation in New Delhi, India
(Image: Anadolu Agency via Getty Images)

The India variant, formally known as the B.1.617 variant, accounted for just just 0.2 per cent of UK lab-confirmed positive tests at the end of March, MailOnline reported.

The total had jumped to 0.5 per cent the week ending April 3.

It tripled in a week – to 1.7 per cent – by April 10. That figure was an eight-fold rise on the total two weeks earlier.

The number of confirmed cases has soared to 400, as of Thursday, a five-fold rise from the total two weeks ago. (77).

Confirmed cases of the India coronavirus variant have been scattered across the UK
(Image: Wellcome Sanger Institute)

Three similar but genetically different strains of the variant have been found in the UK.

Most confirmed cases of the India variant have been linked to travel and there was no evidence the variant had spread across this country, said Public Health England.

India was added to the travel ‘red list’ on April 23 due to that country’s second wave, which has overwhelmed hospitals and seen people die in the streets.

Three cases were recently found in Leicester, leading to surge testing at a school, and figures from the Wellcome Sanger Institute show that Harrow and Hounslow in London are also hotspots.

British medical experts have said there is no evidence the India strains are more likely to severe illness or death, or make existing vaccines any less effective.

The Kent variant (purple) is the dominant strain, while the India variant is seen as a thin strand of red in the top right of the ‘Proportion’ chart
(Image: Wellcome Sanger Institute)

A woman infected with coronavirus is taken to a hospital in Kolkata
(Image: Debarchan Chatterjee/ZUMA Wire/REX/Shutterstock)

It is still unclear whether the strains of the India variant spread any faster than the Kent variant, which fuelled a surge in cases in the UK earlier this year and is the country’s dominant variant.

The identification of the new variants comes as a new analysis showed Covid-19 case rates have dropped below 50 cases per 100,000 people in more than 95 per cent of local areas of the UK.

It is the first time since the start of September that as many as 19 in 20 areas have seen their rates plunge below such a symbolic level.

Around one in 10 areas are even recording rates in single figures.

The video will auto-play soon8Cancel

Meanwhile, NHS England said that text messages will be sent out from Friday to people aged 40 and 41, allowing them to arrange their Covid vaccination appointments.

It means 2.5 million more people have been invited for their first jab.

New figures show estimated 91.5 per cent of people aged 45 and over in England had received their first dose of a vaccine by April 25.

Just over four-in-five aged 70 and over had been given both doses.

Two leading think tanks – Institute for Government (IfG) and King’s Fund – said a public inquiry into the UK’s response to the pandemic should be launched immediately.

Both disputed claims that it was the “wrong time” for an inquiry , saying the first steps could be taken without distracting civil servants from tackling the pandemic.

The IfG said that the inquiry should be established in May.

June Sarpong on the Markle Sparkle