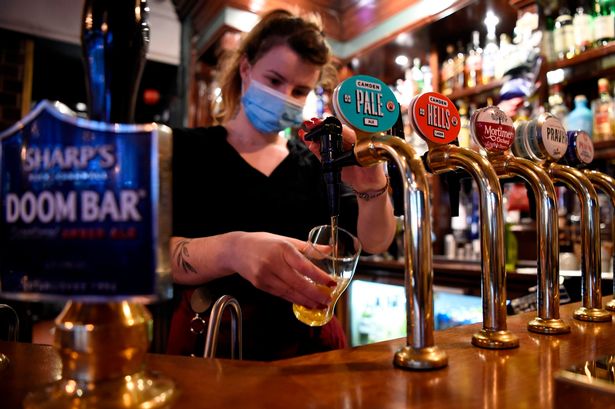 Britain’s high streets are preparing for a Bank Holiday wonder weekend, with consumers tipped to blow £4billion on clothes, meals and nights out.

It marks the first three-day weekend since measures were relaxed across England and Wales, with the country on track to be restriction-free by June.

Twenty million pints are expected to be sipped on over the next 72 hours, as vaccinated Brits hit the town. It comes as the rollout for over-40s gets underway, taking the total number of people who have received at least one jab to 34million.

Vaccine Minister Nadhim Zahawi said indoor mixing will be allowed from next month while Covid proof arrangements will be ready for those heading abroad for summer.

He said the roadmap is also on track with the last two phases to lift on schedule: “The good news is May 17 looks good, June 21 looks good, too.”

Shoppers in London as England takes another step back towards normality
(Image: Alex Lentati/LNP)

Zahawi’s optimism comes as infection rates dropped below 50 cases per 100,000 people in more than 95% of the UK this week.

Under the next stage of the lockdown roadmap on May 17, six people will be able to meet indoors and the last remaining closed businesses will be allowed to reopen – including nightclubs.

The Rule of Six will also be lifted outdoors, allowing groups of up to 30 to gather in the summer heat.

Zahawi said people will not need to present Covid papers, proving they have been jabbed or tested, when pubs and restaurants fully reopen.

He said: “Vaccinations are working — about 70% of the adult population of England have antibodies, almost two-thirds have had a single dose, a quarter have had two doses.”

20 million pints are set to be ordered over the three-day weekend
(Image: REX/Shutterstock)

And he added: “For travel overseas, clearly a number of countries are indicating they will need Covid certification.

“It is right to make the certification available for our citizens and to shape the protocols around the world.

“Because clearly a number of countries are going to do this, we would rather do it in a co-ordinated way.”

And despite fears the NHS App for travelling abroad will not be ready, Mr Zahawi insisted it would be available from May 17.

A British Beer & Pub Association spokesperson said: “Pubgoers will be looking forward to their first Bank Holiday weekend back, particularly after not being able to go there at Easter — and many were closed at Christmas.”

Nadhim Zahawi – the health minister responsible for the deployment of the coronavirus vaccine
(Image: PA)

Around £350million will be spent in pubs and restaurants over the weekend, with more than £3.5billion in shops, according to a VoucherCodes.co.uk report.

Officials have yet to decide on whether the Oxford/AstraZeneca vaccine should be limited to over-40s.

Current advice is for under-30s to get alternative jabs if available due to a risk of rare blood clots.

But the Joint Committee on Vaccination and Immunisation is now considering raising the age limit.

NHS England will start texting adults aged 40 and 41 inviting them for their first jab from today.

NHS boss Sir Simon Stevens said nine in ten of all over-45s have now been vaccinated.