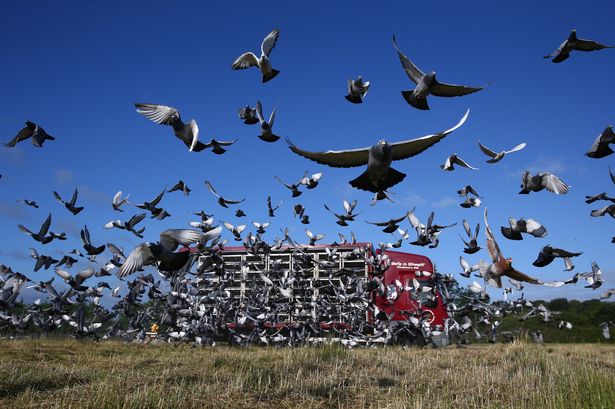 The latest victim of Brexit could be… pigeon racing.

Representatives from the Royal Pigeon Racing Association want the UK Government to intervene after the French government began quarantining birds from the UK for three weeks before they can race.

Talks are ongoing between the governments and fanciers expect an answer about why their birds fall within the latest round of stipulations by next week.

Many, including Scott Robertson, believe it boils down to one thing… Brexit.

Scott, from Aberdeen, keeps more than 80 racing pigeons at his home lofts and recently took part in a nationwide release of the birds on the day of Prince Philip ’s funeral as a tribute to the Duke of Edinburgh, who was a fan of pigeon racing.

What is your view? Have your say in the comment section

The French government began quarantining birds from the UK before they can race from France
(Image: PA)

He said: “Pigeons from Ireland are still permitted to fly from France, but birds from Scotland, England, Wales and Northern Ireland aren’t.

“All of the birds are vaccinated so for me this can only be as a result of Brexit.

“I know a lot of the racers down south send their birds to France to prepare them for long distances and feel these changes could stop them carrying on our sport.”

Some of the pursuit’s most important races are to parts of France, such as Flanders Field, where many pigeon racers use the trip to pay their respects to soldiers who died on the First World War battlefields.

Under EU rules that came into force last week, UK birds must be detained for three weeks and a note from a vet secured before they can be released in France for trans- Channel races.

It has prompted some pigeon owners to claim the birds would be unfit to compete after being caged for such a period, plus the additional cash cost.

Pigeons should not be caged for such a long time if they are to be raced
(Image: Getty Images/iStockphoto)

In an effort to continue training their birds and keep the tradition alive, birds have had to be sent to either end of the UK to simulate the distances they would normally cover from France.

The Department for Environment, Food and Rural Affairs has also compiled a report on the risk of the birds spreading avian influenza overseas.

In the report published earlier this month it was determined that “a medium-risk level would be applicable for countries such as Belgium, Germany and the Netherlands, where wild bird cases are high and reports are frequent”.

It added: “For other regions, the risk is considered low, for example in southern Europe (e.g. southern France and Spain) where cases in wild birds are low and infrequent.”