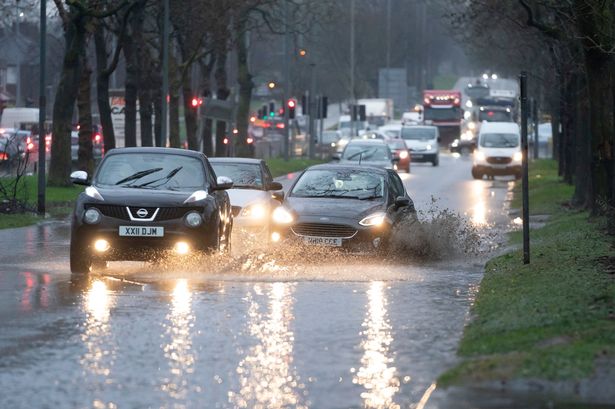 An Arctic blast is set to send temperatures tumbling during a washout Bank Holiday weekend with the possibility of more flooding.

The Met Office warns of scattered showers “becoming heavy in places” and subzero conditions over the next few days as the UK sees in the new calendar month.

This week has already seen torrential rain battering parts of the country with photos showing how high tides caused flooding at The Strood, Mersea Island, Essex.

Central and southern England may see more persistent rain tomorrow and there is even a chance of some snow over the Scottish mountains.

The early May bank holiday weather is likely to be more changeable than recently, with showers and cool temperatures for most of the UK instead of the clear sunny skies of recent days.

What are your Bank Holiday plans? Let us know in the comments

The Bank Holiday is set to be a washout without dipping temperatures
(Image: Jon Super/REX/Shutterstock)

The Met Office said the weekend will bring “a mixture of sunshine, showers, and a cold east to the northeasterly wind”.

It added: “Showers will be most frequent in the north and east, but could become quite widespread overland during the day.

“Some wintriness is probable over high ground of Scotland.”

Temperatures could plunge to freezing

Meteorologist for the national weather agency Annie Shuttleworth said: “You could get some rain over the next couple of days that will bring the totals up.

“It has been a very dry April, with quite a few areas of the UK seeing quite a small margin of their average April rainfall.”

It has been one of the driest Aprils on record, with Britain seeing less than a fifth of the average rainfall for the month so far.

The next few days could be very different to what we’ve seen of late
(Image: Getty Images)

And it is on track to be the frostiest April in the UK for 60 years as continuing clear skies keep temperatures low overnight.

An average of 13 days of air frosts has already been reported across the country, topping the 11 days seen in April 1970, according to provisional figures from the Met Office.

The last few weeks have, however, seen plenty of sunshine and some temperatures above 20C.

The peak was felt last week in Porthmadog, Wales, where the mercury reached a maximum of 20.8C on Friday.

Rain in southern areas, perhaps heavy in places for a time, not clearing Kent until after dawn; many southeastern areas frost-free. Otherwise clear spells leading to frost in some rural areas, although scattered showers affecting northeastern areas, wintry on hills.

Some sunshine but scattered showers in northeastern areas at first, developing more widely by afternoon, wintry on northern hills. South mostly dry. Feeling rather cold, especially in east and north.

Outlook for Friday to Sunday:

Sunny spells and scattered showers, heavy in places. Temperatures remaining below average with cold nights and frost in places.

Why are female mass shooters so rare? – BBC News

Queen's speech: Brexit and NHS at heart of government agenda