India Covid variant arrives in UK: Everything we know 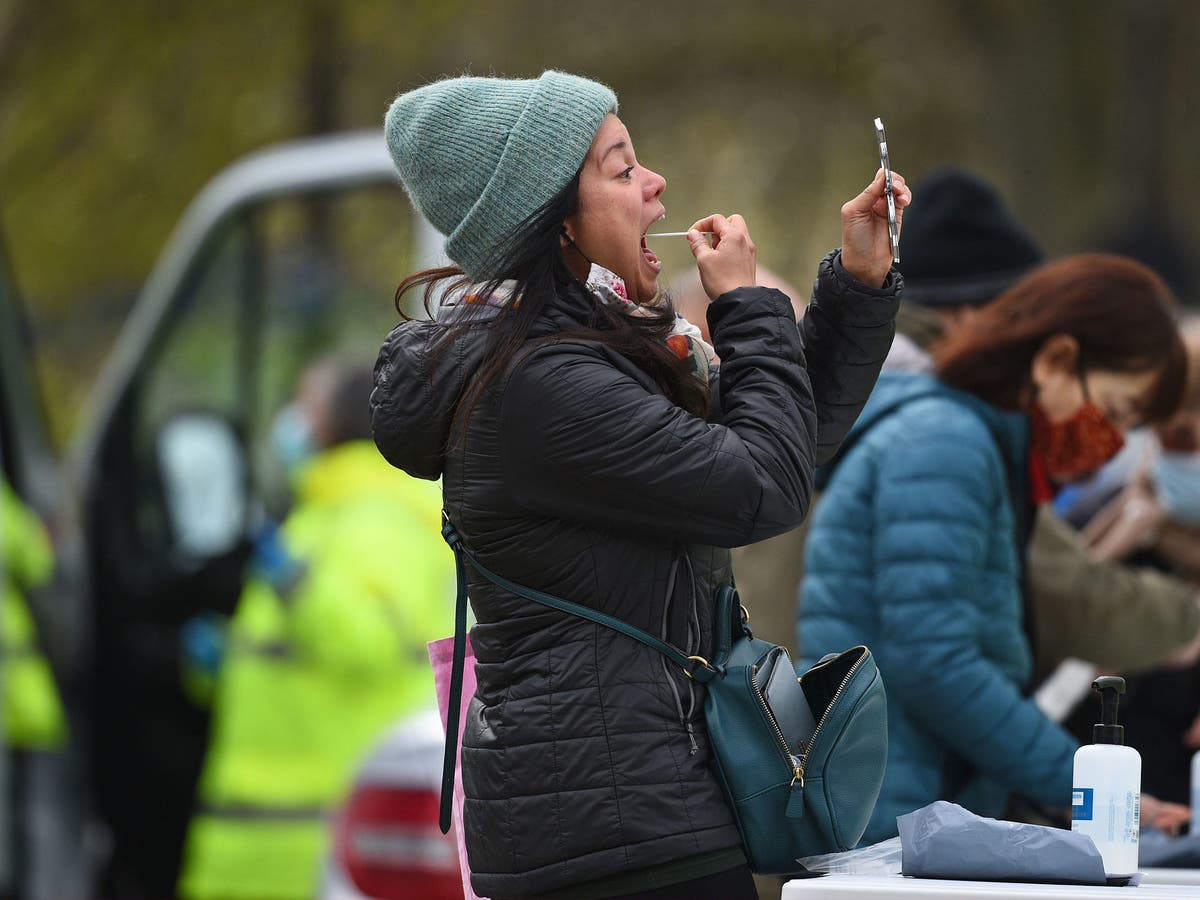 The discovery of 77 cases of a new coronavirus variant, which first emerged in India, has caused concern among scientists and the government.

Public Health England (PHE) said 73 cases of the B.1.617 variant have been confirmed in England as well as four cases in Scotland.

Officials consider it a “variant under investigation (VUI)” rather than a “variant of concern” (VOC), which includes the Manaus, UK and South African variants.

Why are there concerns about the Indian coronavirus variant?

The Indian coronavirus variant is considered to have concerning epidemiological, immunological or pathogenic properties.

Paul Hunter, professor in medicine at the University of East Anglia, said the variant features two “escape mutations” – E484Q and L452R – which “are causing people to be concerned”.

“There’s laboratory evidence that both of these are escape mutations,” he told the PA news agency.

“Basically, applying what we know about other human coronaviruses would suggest that this is going to be even less controlled by vaccine. But we don’t know that for certain at the moment.”

This variant, along with others, has demonstrated the way in which Sars-CoV-2 can adapt to a human host when placed under selective pressures.

Their unique mutations are specific to the three-dimensional spikes that coat the shell of the virus. “If you think of a lock and key mechanism, the spike protein is the key and then the lock is the receptor on a human cell,” said Professor Deenan Pillay, a virologist atUniversity College London.

Through evolution, this structure has changed shape to make it easier for the virus to bind with and penetrate our cells, as seen with the UK variant.

In some cases, as with the South Africa and India variant, it has mutated to become less recognisable to neutralising human antibodies which would normally attach to the virus’s spike protein and block its entry.

This type of mutation therefore allows Sars-CoV-2 to slip past the first line of immunological defence in people who have been vaccinated or previously infected, enabling the virus to carry on circulating.

Dr Jeffrey Barrett, director of the Covid-19 Genomics Initiative at the Wellcome Sanger Institute, said that B.1.617 should be “watched carefully” but it is “probably not at the top tier of mutations that generate the most concern”.

He told BBC Radio 4’s Today programme that the first cases of the variant were identified late last year.

“This variant has a couple of mutations that are among those that we think are important that should be watched carefully, but they’re actually probably not at the very kind of top tier of mutations, for example in the B117 – or Kent variant – or the South African variant, that generate the most concern.

Millions of tulips in flower near King’s Lynn in Norfolk, as Belmont Nurseries, the UK’s largest commercial grower of outdoor tulips, offers socially-distanced visits to its tulip fields at Hillington to raise funds for local charity The Norfolk Hospice Tapping House

A red panda rests on a tree at Manor Wildlife park, which reopened its doors as lockdown restrictions continue to ease, in Tenby, Wales

Sheep climb the hillside as flames from a moor fire are seen on Marsden moor, near Huddersfield

Uyghurs during a demonstration in Parliament Square, London, which is being held ahead of a House of Commons debate, bought by backbench MP Nus Ghani, on whether Uyghurs in China’s Xinjiang province are suffering crimes against humanity and genocide

People walk at the Taihaku Cherry Orchard in Alnwick

Stephen Maguire (right) of Scotland interacts with Jamie Jones of Wales during day 2 of the Betfred World Snooker Championships 2021 at The Crucible, Sheffield

Scotland’s First Minister, Nicola Sturgeon, checks the teeth of “Dentosaurus” during a visit to the Thornliebank Dental Care centre in Glasgow, as she campaigns ahead of the 2021 Scottish Parliamentary Election

Myanmar’s former ambassador to the UK, Kyaw Zwar Minn, outside his residence in north west London. The ambassador has been barred from entering the Myanmar embassy in Mayfair after he was removed from office

People take part in coronavirus surge testing on Clapham Common, south London. Thousands of residents have queued up to take coronavirus tests at additional facilities set up after new cases of the South African variant were found in two south London boroughs. 44 confirmed cases of the variant have been found in Lambeth and Wandsworth, with a further 30 probable cases identified

Rebecca Richardson (left) and Genevieve Florence, members of the Aquabatix synchronised swimming team, during a practice session in the swimming pool at Clissold Leisure Centre in north London, which has reopened to the public. Many facilities have reopened in the latest easing of lockdown include pubs and restaurants who can serve outside, non-essential shops, indoor gyms and swimming pools, nail salons and hairdressers, outdoor amusements and zoos

The Death Gun Salute is fired by the Honourable Artillery Company to mark the passing of Britain’s Prince Philip, Duke of Edinburgh, at the The Tower of London

Cousin Pascal ridden by James King clears the chair on their way to winning the 4:05

Deliveroo riders from the Independent Workers’ Union of Great Britain outside Deliveroo headquarters in London, as they go on strike in a dispute for fair pay, safety protections and basic workers’ rights

Waves crash over the walls next to Seaham Lighthouse in Durham

Lusamba Katalay (third from left), the husband of Belly Mujinga joins activists at a vigil at Victoria station in London to mark the first anniversary of the death of railway worker Belly Mujinga who died with Covid-19 following reports she had been coughed on by a customer at London’s Victoria station

Members of the Bamburgh Croquet club play a game following the easing of COVID-19 restrictions in Northumberland, Britain

A family walks in St Nicholas’ Park in Warwick, the hot weather which baked much of the UK this week is set to give way to a chilly Easter weekend.

Jamie Klingler from Reclaim These Streets speaks to the media in Clapham Common, south London, after a review by the Chief Inspector of Constabulary Sir Thomas Winsor concluded that Metropolitan Police officers “did not act inappropriately or in a heavy-handed manner” at the vigil

An aerial photo shows people playing tennis at the Mersey Bowman Lawn Tennis Club in Liverpool northwest England on March 29, 2021, as England’s third Covid-19 lockdown restrictions ease, allowing groups of up to six people to meet outside. – People in England rushed outside Monday to enjoy sports, picnics and other previously prohibited activities, as the nation entered the second phase of its coronavirus lockdown easing thanks in large part to a successful vaccination drive

A walrus sleeps on the slipway of Tenby Lifeboat station at Tenby, Wales

A member of staff, in the pool, cleans the bottom of the pool during pre-opening preparation and cleaning of Charlton Lido, south London, following its closure due to lockdown

The sun rises over “The Couple” by artist Sean Henry, which sits off the coast at Newbiggin-by-the-Sea in Northumberland

A giant 60-metre wide sand portrait of 12-year-old Ansha from Ethiopia created by WaterAid on Whitby Beach in Yorkshire. The image of the young girl, who spends hours each day collecting dirty water from a river, was created to illustrate how climate change threatens water access for world’s poorest

Five kayaks, each reflecting the shape of a human bone, form Osteoclast (I do not know how I came to be on board this ship, this navel of my ark) (2021), a sculpture by Teresa Solar, positioned outside Exchange Flags, it’s one of the outdoor exhibits in the 11th edition of Liverpool Biennial which opens March 20, 2021, and features a series of outdoor sculpture, sonic and digital commissions by nine different artists. PA Photo. Picture date: Monday March 15, 2021. PA Photo. To align with government guidelines, the second ‘inside’ chapter will launch the full festival of exhibitions and events hosted by key venues throughout the city in late Spring

Protesters calling for greater public safety for women after the death of Sarah Everard, against the police handling of a gathering on Clapham Common in Sarah Everard’s honour and against a proposed law that would give police more powers to intervene on protests hold up their mobile phones with their torches illuminated in Parliament Square in central London

A well-wisher places flowers at a band-stand where a planned vigil in honour of murder victim Sarah Everard was cancelled after police outlawed it due to Covid-19 restrictions, on Clapham Common, south London

Angela Rayner, deputy leader of the Labour Party, and Jonathan Ashworth, Shadow Health Secretary, launch a poster in central London, criticising the government’s recommendation of a 1 percent NHS pay proposal, following the party’s campaign launch on Thursday for the local and mayoral elections in May

Waves crash over the harbour wall in Newhaven, southern England

Officers from the Metropolitan Police search woodland near to Great Chart Golf and Leisure in Ashford, Kent

“And in terms of spread, clearly this variant has increased in frequency in India around the same time as their very large and tragic recent wave.

“But I just don’t think we know yet whether there’s a cause-and-effect relationship – is this variant driving that spread? Or is it happening at the same time perhaps due to a coincidence?”

Will the UK ban travel from India?

However, the country is not currently on the UK government’s “red list” of travel ban nations.

British or Irish nationals, or people with UK residency rights, are able to return from red list countries but must isolate in a quarantine hotel for 10 days.

Boris Johnson has meanwhile cancelled his visit to Delhi next week as a result of the deteriorating situation in India.

The Prime Minister’s already-curtailed trip was scrapped altogether on Monday, with plans for him to instead speak to his Indian counterpart Narendra Modi later in the month.

Downing Street issued a joint statement from the British and Indian governments.

“In the light of the current coronavirus situation, Prime Minister Boris Johnson will not be able to travel to India next week,” the statement said.

How did the variant arrive in the UK?

Prof Hunter said it is “not surprising” that the variant has come from India.

“If you think about where the main variants have arisen – South Africa, the UK, California, Brazil, and now India – all of these are countries that have really struggled to keep case numbers down,” he said.

“So it’s not surprising. India has got a huge pandemic, and therefore that’s where you’re going to be getting the variant.”

He added: “The big, big anxiety with this one is that it seems – and again this is still a little bit speculative because it hasn’t been confirmed – but… there are two mutations here that are causing people to be concerned.”

How many variants does the UK have?

There are now seven VUIs and four VOCs being tracked by scientists in the UK.

A significant cluster of cases of the South African variant of the virus were found in the London borough of Wandsworth, Lambeth, Barnet and Southwark earlier this week.

A total of 600 cases of the variant of concern have been detected so far in the UK, an increase of 56 in a week.

It prompted a large-scale surge testing operation to test thousands of people living and working in those areas.