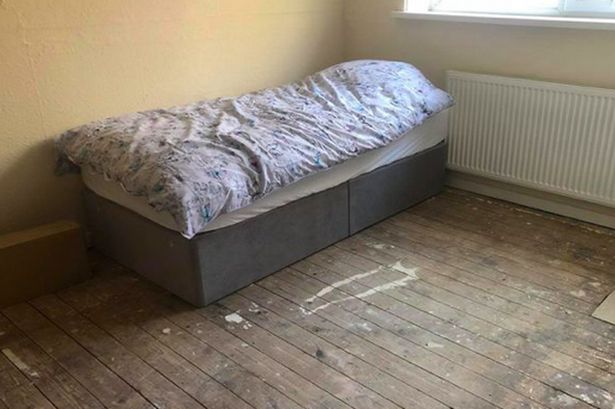 A heartbreaking image of a seven-year-old’s bare bedroom has been shared online.

The haunting picture of a room that is empty besides a single, frameless bed, depicts the stark reality of what life is like for children swept up in the “poverty crisis”, Leeds Live reports.

The startling image, shared by Zarach – a Leeds-based charity that deliver beds and basics to children in poverty – shows the “nothingness” some children are forced to live in through no fault of their own.

Zarach, shared the image as part of a JustGiving campaign, asking people to help “fleeing families” make their house a home by helping to fund new carpets and flooring.

The JustGiving page read: “Lets make sure young children can run around and play safely in their own homes by making sure mums fleeing domestic abuse start off their new life with carpets.”

Zarach founder, Bex Wilson, explained why it was vital for the funds to be raised.

She said: “This photo of a seven-year-old’s bedroom has haunted me all week.

“We delivered this bed bundle last Thursday. This isn’t a ‘we’ve just moved in and the furniture, flooring, curtains etc are on there way’ scenario. This. Is. It.

“The truth is we see children living in houses with nothing so often and for a huge range of reasons.

“I’ve heard many stories of the journey to this ‘nothingness’ level of poverty crisis. Never is it a choice.”

She noted that what “every story” had in common was that each child had either “broken-hearted” parents or parents “struggling to make ends meet”.

She said: “By that I mean often choosing between food or gas and electric.”

In reference to the photograph, Bex said that the charity had managed to help this particular family secure second hand furniture and bed bundles.

“Mum has been an absolute boss woman and found loads of lovely free stuff on Facebook market place and scrubbed every cm clean from top to bottom,” Bex said.

She also shared a text message from the mum, thanking the charity for all that they had done.

But Bex noted that one thing they still needed to provide was carpet and flooring.

She said: “It’s a constant need we come up against. I have a list of four families all with children under five, living hand to mouth and in homes without any flooring.

“Local businesses The Gift Box Leeds and County Carpets Leeds have been great supporters of ours for a long time and have now notched it up a level by agreeing to help us out with sourcing and fitting bargain flooring.

“We’ve set up a JustGiving campaign and every penny raised will go directly on getting flooring for these families.”

So far the JustGiving page has raised more than £8,000.