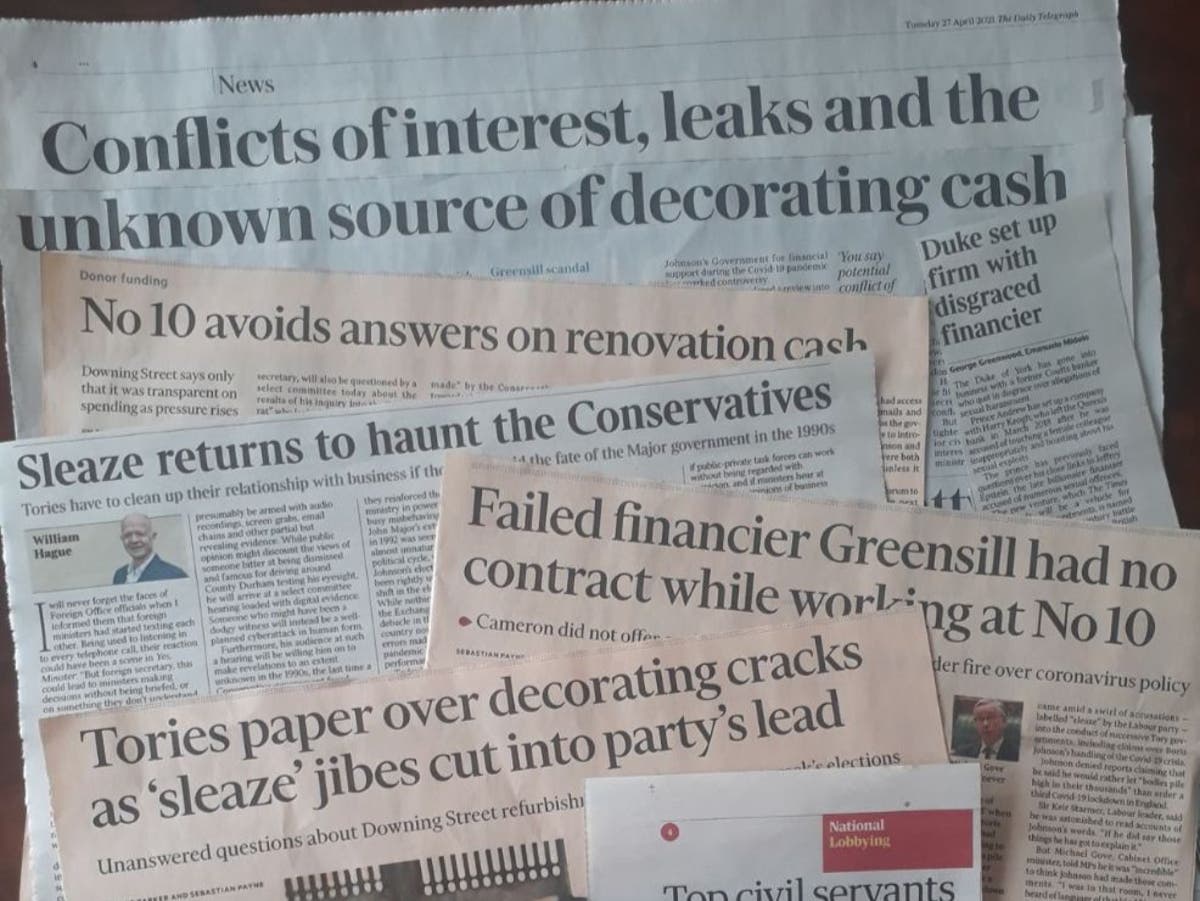 Russia’s embassy in London has suggested it does not entirely agree with Dominic Raab’s claim the UK is a “global leader in tackling corruption”, by posting a disparaging tweet about something the foreign secretary said on Monday.

“‘This country has an important role to play in the fight against corruption. That’s why we have already taken steps to become a global leader in tackling corruption and illicit finance’ – Dominic Raab, 26/04/2021,” the post reads.

It sits alongside an image of British newspaper headlines – including from The Times, The Guardian and The Daily Telegraph – exposing various recent scandals such as Greensill lobbying and Boris Johnson’s flat refurbishment.

The tit-for-tat insinuation by Russia comes after Mr Raab issued 22 sanctions yesterday, including against 14 individuals allegedly involved in a major tax fraud uncovered by Russian lawyer and whistleblower Sergei Magnitsky.

Mr Raab said he wanted to hold the corrupt to account and to stop them from “using the UK as a haven for dirty money”.

Boris Johnson faces threat of sanction if he failed to declare loan for flat renovationBoris Johnson news – live: PM under mounting pressure as Labour calls for probe over flat refurb ‘cover-up’Former minister facing calls over promise soldiers’ trial would not go ahead

It marked the first time Britain imposed asset freezes and travel bans under the new Global Anti-Corruption sanctions regime, which, according to Mr Raab, was largely set up due to the bravery of Mr Magnitsky.

The lawyer was arrested in Russia in 2008 after a corruption investigation he conducted linked a number of Russian officials to one of the largest tax frauds in recent Russian history. Those involved were accused of diverting some $230m (£165.4m) of Russian state property through a fraudulent tax refund scheme.

He died in prison the following year, and a human rights commission later found signs the 37-year-old had been beaten.

“His courage was not in vain,” Mr Raab told MPs on Monday.

UK-Russia relations have been strained for some time now, by various incidents dating back to 2018. Most significant is the Salisbury Novichok poisonings, which killed 44-year-old Dawn Sturgess and left her partner, Charlie Rowley, critically ill after they became exposed to the nerve agent.

While the Kremlin has consistently denied it had any part to play in the attack, British authorities believe Vladimir Putin sent two men – known by aliases Alexander Petrov and Ruslan Boshirov – to England to assassinate former Russian agent Sergei Skripal.

Petrov and Boshirov were caught on CCTV in Salisbury the day before the attack, and were later accused of travelling to the UK to wipe the highly toxic substance on Mr Skripal’s door handle and around his home.

Evidence gathered by intelligence agencies led the UK government to conclude the men were officers from the Russian military intelligence service, the GRU.

Mr Putin to this day claims the two suspects were civilians and refers to an interview in which the pair state they were simply tourists visiting Salisbury Cathedral.

The UK also very vocally supported Kremlin critic Alexei Navalny after he was poisoned with Novichok last summer, thought to be another assassination attempt by the Kremlin.

Again, Moscow vehemently denied these claims and accused the UK of jumping the gun with its accusations.

More recently, Mr Raab took a stand against Russia and threw UK support behind Ukraine when reports emerged that Mr Putin was unnecessarily sending troops to the border the two countries share.

It caused panic across the EU and around the world, prompting Mr Raab to tweet the following: “I reaffirmed UK support for Ukraine’s sovereignty & territorial integrity in my call with [Ukrainian foreign minister Dmytro Kuleba] today. We are gravely concerned about Russian military activity which threatens Ukraine.”

Russia’s ambassador to the UK warned last August that relations between London and Moscow were “close to frozen” and that the Kremlin was “not in a hurry” to improve its ties with Britain.

Andrei Kelin, using an interview with the Daily Mail to deny allegations that Russia had tried to interfere in British elections or steal Covid research from labs in the UK, accused Britain of exaggerating “very much”.

“These are senseless accusations which we do not understand,” the ambassador said. “I feel that Britain exaggerates, very much, its place in Russian thinking. The scope and place of Great Britain in Russian politics is not that big.”

“We have other problems of much larger magnitude,” he added.

The Russian embassy said: “The tweet sought to draw attention to the hypocrisy of the UK claim to leadership in international anti-corruption, including through obviously politicised and biased ‘anti-corruption sanctions‘ precisely at the time when serious allegations of high-level corruption are high on Britain’s domestic agenda.”