Brexit: Why has Boris Johnson’s deal caused UK milk and cream exports to EU to plunge? 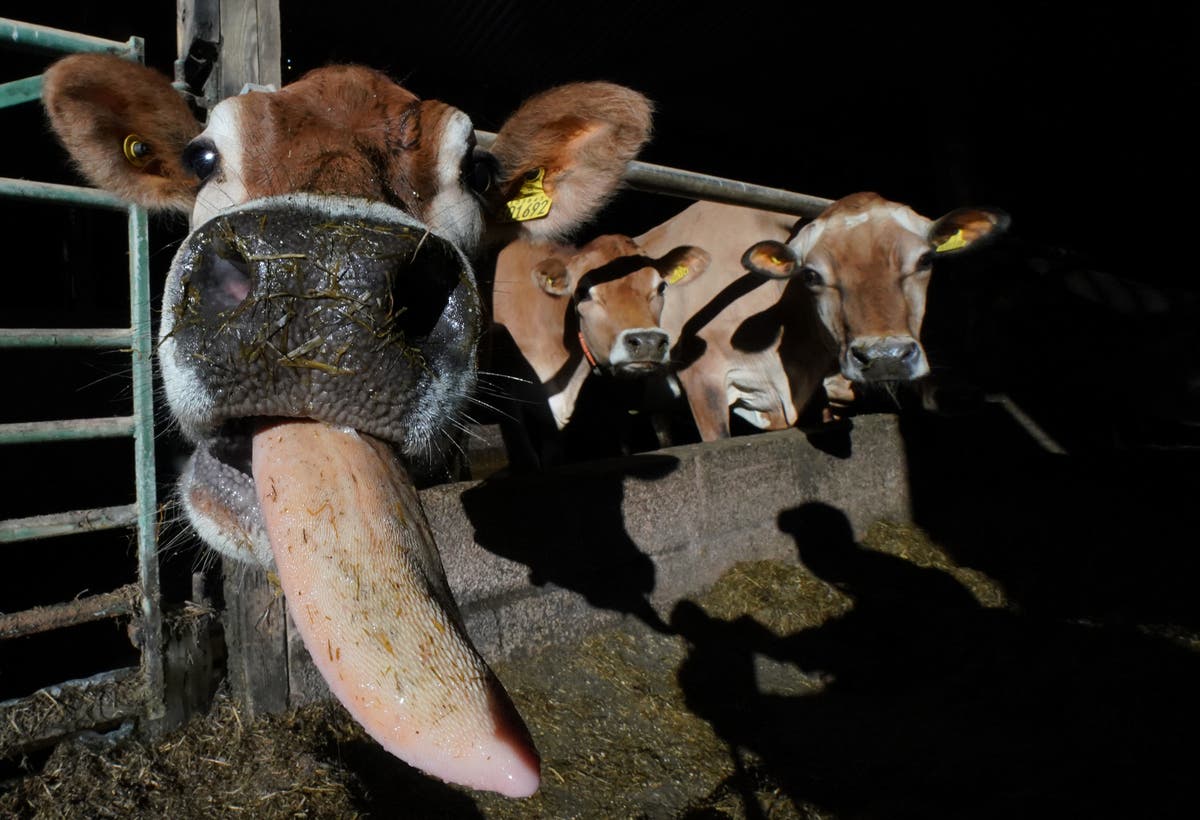 Milk and cream sales to the EU have slumped 96 per cent as a result of Brexit-related trade barriers, according to figures released this week.

The Food and Drink Federation said the new trading arrangement with Europe had cost exporters more than £1.1bn since January, when Britain left the customs union and single market.

Milk and cream exports collapsed by 96.4 per cent while cheese sales to the EU fell by 64.6 per cent in the year to February.

Buttermilk and yoghurt exports were also down 91 per cent, comparing February 2021 with the same month a year earlier, while butter exports plummeted by 89 per cent, milk powder was down 86 per cent, whey fell 83 per cent and cheese dropped 75 per cent.

Extra costs, and the necessity for additional preparation to be made before items are packaged and shipped, are also said to be turning European importers off British products. These hurdles are said to be affecting smaller businesses disproportionality.

The industry has warned that the resulting collapse of “groupage” movements – where goods from different companies that are being shipped to different locations are grouped on one lorry – is compounding the problem, especially for small and medium-sized businesses.

For example, The Cheshire Cheese company said earlier this year it could no longer sell barrels of cheese directly to consumers in the EU because of Brexit red tape – forcing it to consider setting up in France.

The company sold £180,000 worth of truckles, the traditional name for cheese shaped like a barrel, to countries across Europe last year.

However, managing director Simon Spurrell said that was no longer possible because of the huge additional costs now involved in shipments.

The company found that sending specialist cheeses worth around £25 to EU customers requires a health certificate, signed off by a vet, that costs £180 pounds per consignment.

A red panda rests on a tree at Manor Wildlife park, which reopened its doors as lockdown restrictions continue to ease, in Tenby, Wales

Sheep climb the hillside as flames from a moor fire are seen on Marsden moor, near Huddersfield

Uyghurs during a demonstration in Parliament Square, London, which is being held ahead of a House of Commons debate, bought by backbench MP Nus Ghani, on whether Uyghurs in China’s Xinjiang province are suffering crimes against humanity and genocide

People walk at the Taihaku Cherry Orchard in Alnwick

Stephen Maguire (right) of Scotland interacts with Jamie Jones of Wales during day 2 of the Betfred World Snooker Championships 2021 at The Crucible, Sheffield

Scotland’s First Minister, Nicola Sturgeon, checks the teeth of “Dentosaurus” during a visit to the Thornliebank Dental Care centre in Glasgow, as she campaigns ahead of the 2021 Scottish Parliamentary Election

Myanmar’s former ambassador to the UK, Kyaw Zwar Minn, outside his residence in north west London. The ambassador has been barred from entering the Myanmar embassy in Mayfair after he was removed from office

People take part in coronavirus surge testing on Clapham Common, south London. Thousands of residents have queued up to take coronavirus tests at additional facilities set up after new cases of the South African variant were found in two south London boroughs. 44 confirmed cases of the variant have been found in Lambeth and Wandsworth, with a further 30 probable cases identified

Rebecca Richardson (left) and Genevieve Florence, members of the Aquabatix synchronised swimming team, during a practice session in the swimming pool at Clissold Leisure Centre in north London, which has reopened to the public. Many facilities have reopened in the latest easing of lockdown include pubs and restaurants who can serve outside, non-essential shops, indoor gyms and swimming pools, nail salons and hairdressers, outdoor amusements and zoos

The Death Gun Salute is fired by the Honourable Artillery Company to mark the passing of Britain’s Prince Philip, Duke of Edinburgh, at the The Tower of London

Cousin Pascal ridden by James King clears the chair on their way to winning the 4:05

Deliveroo riders from the Independent Workers’ Union of Great Britain outside Deliveroo headquarters in London, as they go on strike in a dispute for fair pay, safety protections and basic workers’ rights

Waves crash over the walls next to Seaham Lighthouse in Durham

Lusamba Katalay (third from left), the husband of Belly Mujinga joins activists at a vigil at Victoria station in London to mark the first anniversary of the death of railway worker Belly Mujinga who died with Covid-19 following reports she had been coughed on by a customer at London’s Victoria station

Members of the Bamburgh Croquet club play a game following the easing of COVID-19 restrictions in Northumberland, Britain

A family walks in St Nicholas’ Park in Warwick, the hot weather which baked much of the UK this week is set to give way to a chilly Easter weekend.

Jamie Klingler from Reclaim These Streets speaks to the media in Clapham Common, south London, after a review by the Chief Inspector of Constabulary Sir Thomas Winsor concluded that Metropolitan Police officers “did not act inappropriately or in a heavy-handed manner” at the vigil

An aerial photo shows people playing tennis at the Mersey Bowman Lawn Tennis Club in Liverpool northwest England on March 29, 2021, as England’s third Covid-19 lockdown restrictions ease, allowing groups of up to six people to meet outside. – People in England rushed outside Monday to enjoy sports, picnics and other previously prohibited activities, as the nation entered the second phase of its coronavirus lockdown easing thanks in large part to a successful vaccination drive

A walrus sleeps on the slipway of Tenby Lifeboat station at Tenby, Wales

A member of staff, in the pool, cleans the bottom of the pool during pre-opening preparation and cleaning of Charlton Lido, south London, following its closure due to lockdown

The sun rises over “The Couple” by artist Sean Henry, which sits off the coast at Newbiggin-by-the-Sea in Northumberland

A giant 60-metre wide sand portrait of 12-year-old Ansha from Ethiopia created by WaterAid on Whitby Beach in Yorkshire. The image of the young girl, who spends hours each day collecting dirty water from a river, was created to illustrate how climate change threatens water access for world’s poorest

Five kayaks, each reflecting the shape of a human bone, form Osteoclast (I do not know how I came to be on board this ship, this navel of my ark) (2021), a sculpture by Teresa Solar, positioned outside Exchange Flags, it’s one of the outdoor exhibits in the 11th edition of Liverpool Biennial which opens March 20, 2021, and features a series of outdoor sculpture, sonic and digital commissions by nine different artists. PA Photo. Picture date: Monday March 15, 2021. PA Photo. To align with government guidelines, the second ‘inside’ chapter will launch the full festival of exhibitions and events hosted by key venues throughout the city in late Spring

Protesters calling for greater public safety for women after the death of Sarah Everard, against the police handling of a gathering on Clapham Common in Sarah Everard’s honour and against a proposed law that would give police more powers to intervene on protests hold up their mobile phones with their torches illuminated in Parliament Square in central London

A well-wisher places flowers at a band-stand where a planned vigil in honour of murder victim Sarah Everard was cancelled after police outlawed it due to Covid-19 restrictions, on Clapham Common, south London

Angela Rayner, deputy leader of the Labour Party, and Jonathan Ashworth, Shadow Health Secretary, launch a poster in central London, criticising the government’s recommendation of a 1 percent NHS pay proposal, following the party’s campaign launch on Thursday for the local and mayoral elections in May

Waves crash over the harbour wall in Newhaven, southern England

Officers from the Metropolitan Police search woodland near to Great Chart Golf and Leisure in Ashford, Kent

Dominic Goudie, the FDF’s head of international trade, said: “UK businesses continue to struggle with inconsistent and incorrect demands at EU borders, and small businesses have been hardest hit due to the collapse of groupage distribution into the EU.

One headache for UK exporters now that they are outside the bloc is the EU Rules of Origin legislation, which puts a limit on how much of a third country’s ingredients – for example those of the UK – can be used when producing goods in the EU.

“Trade with the EU is well below normal levels across all sectors and dairy is no exception,” said AHDB analyst Charlie Reeve.

“Volumes of UK dairy exports to the EU during February were marginally higher across most products than in January. Despite this small month-on-month increase, they remain notably lower than volumes exported this time last year.”

The government has previously blamed a “unique combination of factors, including stockpiling last year, Covid-19 lockdowns across Europe, and businesses adjusting to our new trading relationship”.

The Independent asked Defra to explain the drop in exports but did not hear back at the time of publication.

Royals visit Pakistan for the first time in 13 years