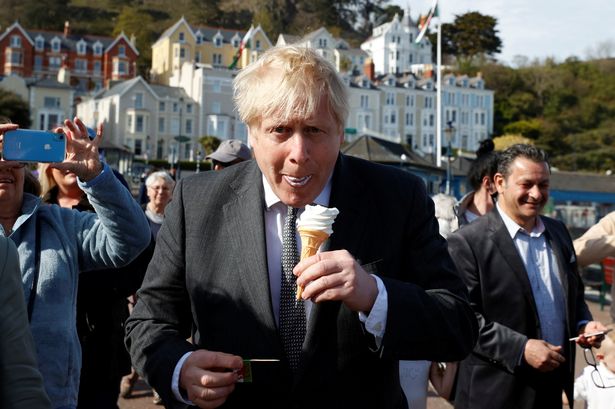 There will “probably” be a third wave of coronavirus in the UK, Boris Johnson has warned.

The Prime Minister insisted Britain was not out of the woods even as daily deaths dropped to six from the virus yesterday.

He spoke on a visit to Wales as countries around the world deal with a deadly Covid surge – including India, which recorded 323,144 new cases and 2,771 new deaths in 24 hours yesterday.

Turkey has also announced a “full lockdown” from tomorrow to May 17 after logging 37,312 new infections and 353 deaths in the last 24 hours.

Mr Johnson said the UK’s vaccination programme, with more than half of the entire population having had a first dose, would slow the spread of the disease but not stop it completely.

“We have got to be realistic about that, unfortunately there probably will be another wave of the disease, but I think that the vaccination programme has now been so massive – 33.6 million people vaccinated.

A patient suffering from Covid-19 is treated at an Intensive care unit of Ankara’s hospital in Turkey
(Image: AFP via Getty Images)

“We have built up what I think are some pretty robust fortifications against the next wave, we will have to see how strong they really are in due course.”

It is only the latest of several warnings by the Prime Minister that a third wave is likely this summer.

A week ago he said: “As we look at what is happening in other countries, with cases now at record numbers around the world, we cannot delude ourselves that Covid has gone away.

“There is nothing in the data now which makes me think we are going to have to deviate from the roadmap we have set out.

“But the majority of science opinion is still that there will be another wave of Covid at some stage this year. We must learn to live with this disease.”

Three separate models for the government’s SAGE advisors earlier this month warned of a third wave of Covid this summer.

A SAGE subgroup said: “It is highly likely that there will be a further resurgence in hospitalisations and deaths after the later steps of the Roadmap.”

The reason for this the combination of three things together. Some people – mostly children – are ineligible for vaccination, others choose not to get a jab, and people who’ve had the vaccine don’t get 100% protection.

Imperial estimated only 44.6% of the population will be protected against severe disease by June 21, “plateauing” at 61% later in summer.

In “most” scenarios, the peak of a third wave was smaller than that of either the second wave in January 2021, or the first in April 2020.

In some “plausible” scenarios given to SAGE – if there was poorer vaccine efficacy and few measures at Step 4 – the number of hospital cases could match the 35,000-odd peak seen in January.

However, some SAGE scientists are more optimistic as take-up of the vaccine has been more widespread than expected.

Modelling from Warwick University of how full hospital beds could be in a third wave
(Image: SAGE)

It comes as 42-year-olds were able to book vaccine appointments from today in the UK.

A Government campaign – called “every vaccination gives us hope” – includes a TV advert which will showcase the health workers and volunteers involved in the vaccination rollout across the UK.

The campaign will predominantly be aimed at people under the age of 50 who will be offered their first dose, as well as the over-50s who are booked in for their second dose, to encourage vaccine uptake.

Meanwhile the Foreign, Commonwealth and Development Office said nine plane-loads of life-saving kit – including ventilators and oxygen concentrators – have been sent to New Delhi.

Further consignments are due to be dispatched later this week, while part of the shipment of emergency medical supplies is 100 non-invasive breathing aids from University College London (UCL).

UCL said that its continuous positive airway pressure (CPAP) device had been used extensively throughout the pandemic and could prevent a significant proportion of people from needing mechanical ventilation.

Foreign Secretary Dominic Raab said the first UK medical supplies have arrived in India and they “will be deployed where they are needed most”.

He added: “No-one is safe until we are all safe. International collaboration is key to fighting this global threat.”