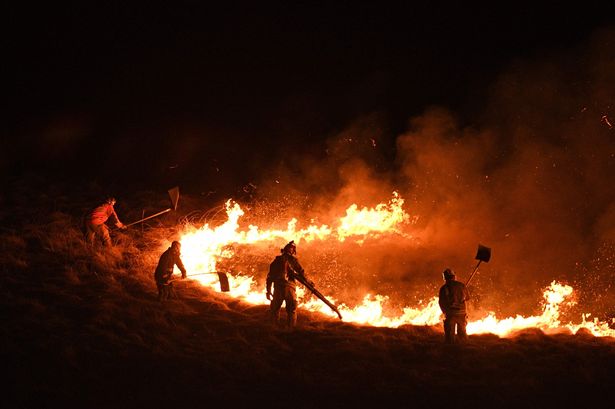 Hundreds of firefighters have tackled serious wildfires after a prolonged dry spell which has led to grass and gorze blazes over the weekend.

The blaze is almost two years to the day since fire destroyed 1,730 acres of land in April 2019, which was started by a barbecue.

The fire started on an area of National Trust land near Black Moss Reservoir and Swellands Reservoir.

The area is known for its breeding bird habitat and is a popular site for rare curlews.

What is your view? Have your say in the comment section

The ring of wildfire engulfed the area
(Image: AFP via Getty Images)

It is also home to short-eared owl and mountain hares.

Craig Best, countryside manager for the National Trust, which said: “It’s so frustrating to see yet another fire on our moors after all the hard work our team have put in to try and restore the landscape after last time.

“Although not on the same area of land as the 2019 fire, this fire has also destroyed a crucial area for rare birds and mammals, as well as a carbon-capturing blanket bog.

Sheep climb the hillside to escape the flames from a moor fire
(Image: AFP via Getty Images)

“Unfortunately, this was another fire started by people and could have so easily been avoided.”

West Yorkshire Fire and Rescue service said ten pumps had been deployed to tackle the flames.

Barbecues and fires are banned on the moors all year round to protect the landscape, with anyone breaching the ban liable to face a fine of up to £2,000.

Firefighters declared a ‘major incident’ after a huge blaze at landfill site in Greater Manchester – Viridor Waste Management on Pilsworth Road, Bury, at around 2am on April 26
(Image: GMFRS/MEN Media)

Large fires have been battled over in Cornwall, Dorset, Lancashire, Greater Manchester, the Lake District, north Wales, Northern Ireland and Orkney over the past four days.

This month has been one of the driest Aprils on record, leading to an increased risk of wildfires.

Previously the Mirror reported how this year has been one of the ­hottest since records began, as the world comes to the end of a decade of “exceptional” heat.

Marsden moor is home to many animals
(Image: AFP via Getty Images)

Global temperatures have been 1.1C above pre-industrial levels, data from January to October shows.

This puts the year on course to be the second or third warmest in records dating to the 19th century.

The past decade and five years have also been the hottest, the World Meteorological Organisation said.

WMO secretary-general Petteri Taalas added: “If we don’t take urgent action, we are heading for an increase of more than 3C by the end of the century with ever more harmful impacts on human well-being.

“On a day-to-day basis, the impacts of climate change play out through extreme and abnormal weather.”

United Nations body the WMO warns sea levels are rising ever faster, ice is melting and “once in a century” heatwaves and floods are becoming more regular occurrences.

A farm house is pictured in front of the large fire on the Marsden Moor estate near the village of Marsden in West Yorkshire
(Image: Matt Wilkinson/Stella Pictures Ltd)

Millions were forced from their homes due to extreme events such as cyclones and hurricanes.

The past year has featured two major heatwaves in Europe, with a temperature record of 38.7C set in the UK.

The report is released as countries meet in Madrid for UN climate talks.

Prof Tim Osborn, from UAE, said: “The five warmest years for average global surface temperature since records began in 1850 have all occurred in the last five years; by contrast the five coldest years all occurred before 1912.

“This is climate change and not a coincidence.”