Brit dad stuck in Thailand with cancer needs £88,000 a year to continue fight in the UK 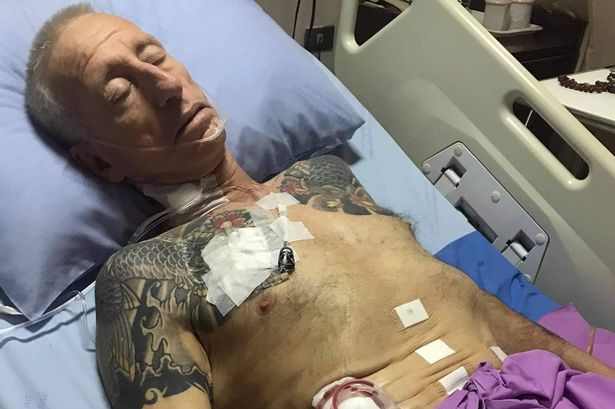 A Brit stuck in Thailand after being diagnosed with incurable cancer is trying to raise funds to extend his life in the UK.

Andy Tracey was trying to enjoy a well-earned break when he started suffering crippling stomach pains so sought medical help.

After undergoing several tests, he was given the devastating news that he had stage 4 pancreatic cancer on March 21 last year.

Medics in Thailand gave him just months to live.

Due to the pandemic, the 59-year-old was unable to fly home to be with his family and friends so was forced to stay in Thailand where he had an operation followed by 12 rounds of chemotherapy.

What do you think of this story? Let us know in the comments section below

Andy before he was diagnosed with cancer
(Image: Andy Tracey)

This bought him time to research his illness and he discovered the drug Olaparib, which is sold under the brand name Lynparza, that is used for women battling ovarian cancer and can also be used for people with his condition.

Andy said the medication is available for pancreatic cancer sufferers in parts of Europe and the US but not offered by the NHS in England.

His travel insurance company has been footing the bill in Thailand but now Andy is well enough to return home he will have to stump up the £88,000 yearly cost himself, as it is only available on the NHS for ovarian cancer sufferers.

The dad-of-two told the Mirror: “It’s been a blessing in disguise I was diagnosed in Thailand because I have been told if I was in the UK I would have been given palliative treatment so I would probably have been dead by now.

Andy gave up his life in London to look after his parents
(Image: Andy Tracey)

“I am responding well to this treatment and now have had the all clear on my scans so I’m free to go home but Lynparza isn’t available on the NHS which means I have to pay for it myself.

“I really love my life and I want to continue living it when I return to the UK.”

Andy, who is from Clapham, south London, decided to fly out to Thailand last year after losing his mum and dad within months of each other.

The former furniture boss had given up his London life to move to Sussex to take care of them both before they died three years later.

Following his double loss he said he needed a break so flew out to Asia but he fell ill within days of arriving there.

“When I arrived in Thailand I was out of energy and had stomach pains,” he said.

Doctors in Thailand have been treating Andy
(Image: Andy Tracey)

“I went to see a doctor and they did a scan which showed I had a tumour on my pancreas and I was diagnosed with stage four pancreatic cancer which had metastasised to my liver.

“The oncologist told me there is no cure and I had three months or if I was lucky a year so I was immediately put on chemotherapy.

“Some people with my cancer are too weak to have chemotherapy but I got through it.”

Andy also relies on a daily cocktail of vitamins and supplements.

He said: “With my first rounds of chemotherapy I was so weak and lost so much weight I had to learn to walk again.

Andy has had an operation and chemotherapy
(Image: Andy Tracey)

Andy with one of the doctors treating him
(Image: Andy Tracey)

“My weight fell from 85kg to 58kg and I was in danger but I have got through it all.

“It’s been an emotional year, a continuous battle and I’m just smashed to bits.

“I just want to go home and be with my sons.

“I don’t accept on any level that I’m dying. I’m really strong, I do yoga every day and I am trying everything I can do to turn this cancer around so I need Lynparza when I return home.

“The downside is I could develop leukaemia but that’s a chance I am willing to take.”

Andy’s friend Grace O’Neill started a crowdfunder to help raise funds for her pal after she learnt of his diagnosis.

Andy will have to pay £88,000 a year for his medication in England
(Image: Andy Tracey)

She told the Mirror: “Andy is trying to do everything he can to give himself a chance as he decided he wasn’t going to accept his prognosis.

“It’s still quite risky for him to come back and continue to take Lynparza but this gives him real hope as it can extend his life by up to four years.

“This could also buy him time to find another treatment or take part in a clinical trial.

“Andy is a powerhouse of motivation and positivity.”

Andy said he’s pinning his hopes on the generosity of others in his quest to continue living.

“If people could find it in their hearts to give something I would be so grateful,” he said.

‘Nothing is too small and greatly appreciated. I need some more time to spend with my sons and Lynparza is my only chance.”

A spokesman for NICE, who makes decisions on whether a drug or treatment should be available on the NHS, told the Mirror: “NICE can confirm that the Department of Health and Social Care has asked us to produce guidance which looks at the use of Olaparib for maintenance treatment of BRCA mutation-positive metastatic pancreatic cancer after initial platinum-based chemotherapy.

“This has gone through the early stages of our technology appraisal process and any developments can be followed on our website.

“Following on from advice received from the company, further information regarding the timelines for this appraisal will be available in due course.”

Anyone who wished to donate to Andy’s cause can do so by visiting here.